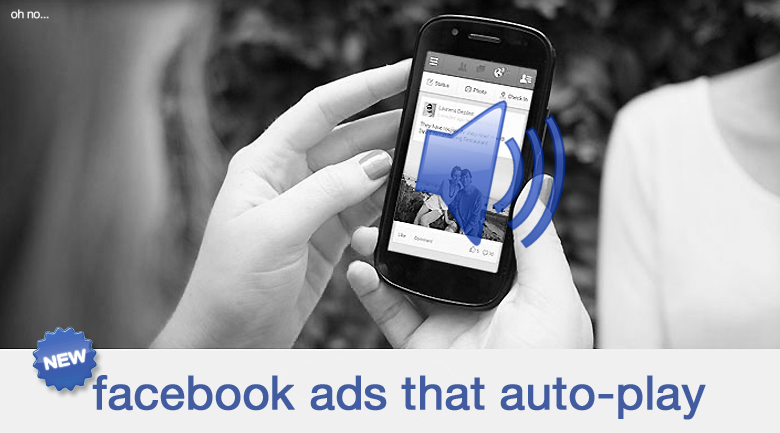 Facebook may soon allow advertisers to feature video ads, which would be inserted into users’ timelines, and while the videos are said to be capped at 15 seconds, the ads may begin playing automatically. According to AdAge, “several industry executives who have been briefed on the company’s plans over the past few weeks” say the video-ad product will launch in the first half of 2013.

While this is Facebook’s way of pirating television advertisers accustomed to big spends, and is an attractive way for big brands to shift some of their dollars from traditional advertising to digital, it is a questionable move. Featuring Facebook ads in a user’s timeline is not problematic at all, in fact, it could be a boon for advertisers, but sites that auto-play any advertising, with or without audio, is universally known as obnoxious, to be polite about it.

Facebook is making it clear that their priority is not with the user, but with the advertiser, and their behavior in recent weeks is actually coming across as anti-user, which would be further perpetuated by auto-playing ads in news feeds. I’m cringing just typing those words. Let’s look at some of Facebook’s recent moves that support how far off of the pro-consumer cliff they have flung themselves:

1. You forfeited your rights – recently, Facebook asked uses to vote on their right to vote on privacy policies in the future. The vote garnered 669,000 votes (primarily opposed to the policy changes), but they were not heard, as Facebook bylaws require 30 percent of users to cast ballots for a vote to be binding, and this vote only accounted for roughly 1.0 percent of total users. To put it in perspective, if every single person in the entire city of Seattle voted, you’d still be shy nearly 50,000 votes. That’s no small feat.

2. Instagram follows suit – this week, Instagram (owned by Facebook) updated their Terms of Service so that they own all photos users take, and can use them as they wish without permission or compensation, even for accounts of minors, with no opt-out clause, causing a major backlash with many users, brands, and celebrities publicly deleting their accounts, to which the Co-Founder responded to by saying they’re listening and that they were just misunderstood. Okay.

3. Deleted photos still existed after deletion – this year, Facebook was called out for storing deleted images on their servers, taking weeks to remove them, and while you couldn’t see deleted images in any gallery, if you had the URL of where they were, they continued to be accessible long after deletion, causing problems for many that Facebook appeared to ignore until public pressure was applied. They say have fixed the problem, but it took a lot to get the error fixed.

We could go on, but you get the point. Facebook is the 800 pound gorilla in the room, and as it is a mainstream business and personal tool now, they are behaving as immaturely as their CEO, with a blatant disregard for consumers in the face of any promise of more money. It’s a business, sure, do what you have to to make stockholders happy, but Facebook is flirting with disaster. If that many people left Instagram overnight, imagine what Facebook is really up against and is ignoring.

Google+ is growing… I wonder why…