Because AGBeat has led the conversation on Pinterest, we get a lot of questions in our email boxes about best practices and how to use the visual bookmarking tool. The first most common question we are asked is whether or not Pinterest should be used for business and we typically respond that it depends on the business, industry and person in charge of the Pinterest account. The second most common question we are asked is who you should follow Pinterest and what the proper etiquette is.

Honestly, there is not a set culture yet or a common method for following people because the site is so young, but secondarily because it is not designed as a social network surrounding the importance of personal connections and conversation, rather it is a site that appeals to the sharing of information visually, regardless of who shares the information. Each user can benefit each other if they are there to learn and share, but we are seeing the social media gurus out telling you to not follow someone if they aren’t going to be of value to you or if they have no pins – we strictly disagree with this stance.

Because the level of followers is still manageable for most users, it is reasonable to follow everyone back not because it is polite, but because you don’t know what they have to offer until you’ve gotten a chance to witness their pinning activities. We are discovering many users have not yet pinned anything, but are being responsible by observing people before jumping in – that does not make them less valuable.

In fact, below are a few people that follow me that I chose to follow back regardless of their not having any pins, but some would tell you these users are not valuable to you and that you should not follow. While you may not know all of these people, I assure you they are all seen as thought leaders in their industries: 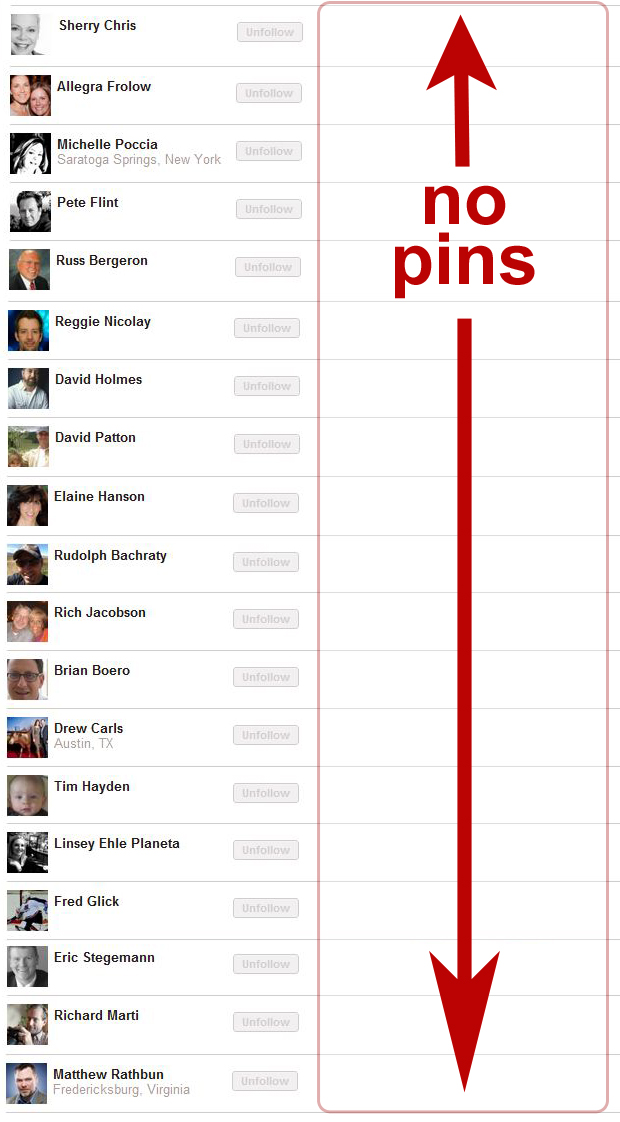 Each user has different goals, so there is no possible way to suggest how you should follow people, it is a personal choice and you may decide to be very selective or overly permissive.

That said, as a general rule of thumb, what we do is follow all people back until they give us a reason not to. When someone gets spammy, we unfollow. When someone posts a bunch of porn, we unfollow. When someone posts nothing but Bieber videos, we unfollow. Not because of who they are, but because of the content, which is our way of adhering to the idea that it is all about the information, not the person sharing the information. Saying you should only follow people with pins that look valuable sounds a lot like someone saying that you should only watch news from a station you agree with, which we all know prohibits intellectual growth. Additionally, no one is so personally important that they should be that picky on Pinterest, puh-lease.

Opting not to follow someone back because you don’t know them or because they haven’t pinned anything could really limit what you learn or see on Pinterest, and in truth, it is an old school thought that you must only follow people that benefit you, as all social networks have proven that there are hidden gems of followers out there that might just be your next brand evangelist.

Pinterest isn’t like Twitter wherein people focus on friend collecting, and no one cares that you just got 200 followers, so be a little less picky, especially if you’re a business, because if you ignore people without pins, you’re ignoring all of the people pictured above like the CEO of Trulia, the CEO of Better Homes and Gardens, the CMO of 44 Doors, the CEO of MRED, and the CEO of Intrepid Artist Management. Decide for yourself who is valuable and hand pick people, or follow everyone back until they give you a reason to unfollow; your strategy is up to you and the network is too young for anyone to have proven results one way or the other.