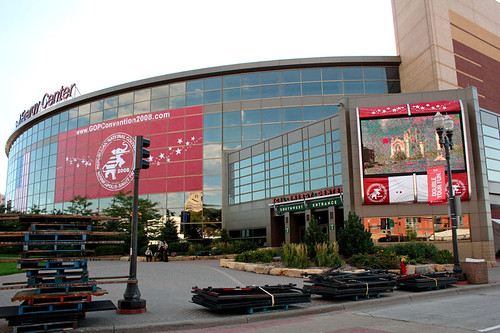 The Republican national convention, referred to as RNC08 is being held just a few blocks from my home. I live in St. Paul, Minnesota. I point out the location of the convention because it is one of the many facts that seems to be escaping the attention of the national media.

It has been an interesting experience, and the convention doesn’t start until Monday. We locals started spotting the FBI agents in early August. Next came the media brining huge trailers, satellite dishes and miles, and miles of cable with them. Then the semi’s started rolling in with all the food and beer.

Where to Find News

Late last week local news organizations started reaching out to people like me asking for any news or photos we might be getting so that they could include a kind of man on the street perspective on their web sites. I have been contributing photos and commentary via Twitter and Flickr.

Where are the Protesters?

The war protesters are out in full force. The local and non-traditional media are picking it up and reporting on the arrests and raids. The protesters, the local media, the national media, and the republicans all seem to be using the same hash tags on the internet #RNC08.

It didn’t take me long to discover something that I have known for a long time. The best source of news seems to be the internet. Last night I discovered that by using twitter I could keep track of various news organizations and the protesters. I also discovered that I could pass information back and forth between news organizations by re-tweeting some of the remarks, and the national news media re-tweeted some of my observations.

Twitter, blogs and mobile blogs are having a huge impact on news coverage. They have also become the great equalizer in that anyone can publish and get news. I can say for sure that the protesters are not getting much national news coverage. I guess there is nothing for the national news media to cover if protesters and demonstrators are in jail and can not assemble or speak. If I got all of my news through mainstream media channels I would be missing out on almost all of the pre-convention action.

A local radio station is asking the general public to watch the national media and report errors in coverage. So far there have been plenty because in spite of all the fancy equipment organizations like CNN brought into town they don’t seem to have maps or a GPS. They sit in the heart of the city of St. Paul and report news live from Minneapolis. Can the general public really rely on reporters who don’t even know where they are?

It is the same with the national coverage of the Real Estate market by the national media. They don’t know what is really going on in a given town or neighborhood. Consumers may be better off reading our blogs and getting that street level view of reality from people who are engaged in the business every day.