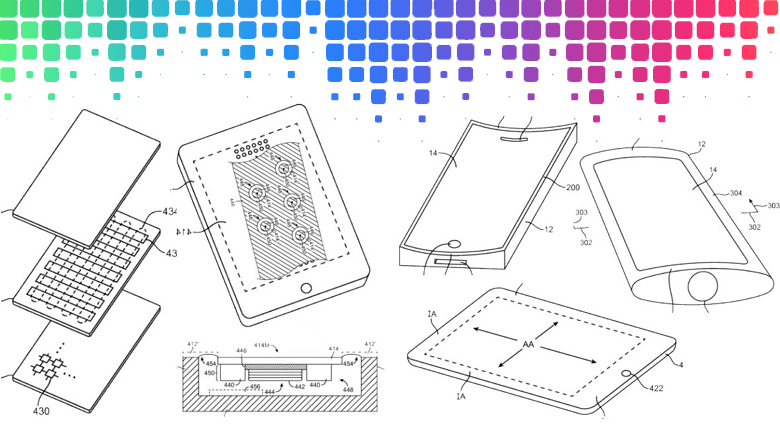 Yesterday, Apple was granted a new patent, according to the AppleInsider. It details various mechanisms that will potentially be used with flexible displays. These mechanisms may replace components, such as physical buttons, with more durable alternatives. It could also create alternate ways of detecting sound and providing feedback.

The patent describes, in detail, how a flexible display can be used to enhance existing products at length; including placing flexible material over each individual existing component to create new buttons on an “as needed” basis. This could also be applied to the existing iPhone Home button: you would still be able to access it, but it would give you the feel of a continuous surface, rather than the Home button being separate.

The flexible material would also protect it from damage, as well as help assimilate it into the rest of the screen. According the to AppleInsider, “In some embodiments, the system combines a flexible display layer, such as a compatible OLED substrate, with a similarly flexible capacitive touchscreen layer, which is then covered by a flexible or rigid cover. As the assembly is flexible, users can interact with components installed beneath.” It could also feature haptics: or localized vibrations and sound.

By assimilating the buttons into one cohesive screen, Apple could have the ability to expand screen size, without worrying about button placement. Buttons could also be revealed as needed by embedding them under the display layer and allowing them to push through the screen to create bumps. Sound familiar? It is a bit like the current Tactus keyboard; which creates a keyboard from a transparent cover. Since this technology already exists on some level, it’s a bit unclear as to how Apple was granted this patent, but nonetheless it is pretty innovative, just not original.

The patent also seems to focus on mobile devices like iPhone and iPad, but there does seem to be some provisions for MacBook. The theory for using flexible material on the MacBook is centered around the trackpad. The material would alter its surface and put some space between the bottom and lid, allowing it to open, possibly, without the currently existing grove.

Although this technology is unlikely to be included in the next iPhone release, it is within the realm of possibility for the very near future, especially given space is limited in mobile devices and flexible tech will allow the integration of more features in a smaller space.

In this article:apple, flexible displays, Technology