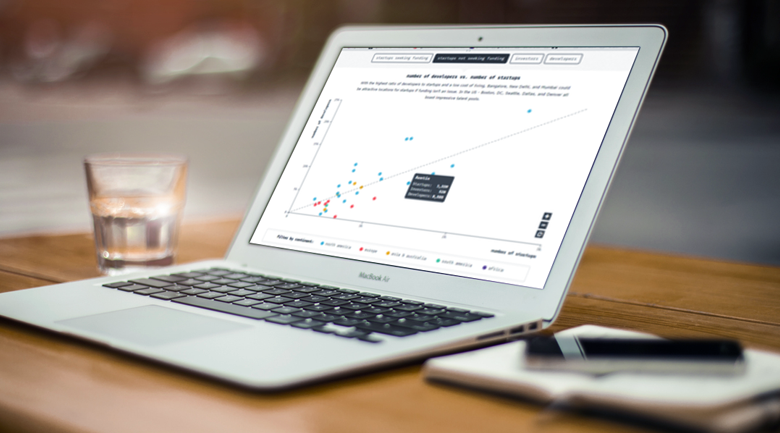 When you think about the startup scene, your mind most likely wanders off into the foggy bay of San Francisco, and while many consider SF the heartbeat of the tech industry, let us consider that Seattle, New York City, Austin, Boston, and Chicago are the arms, legs, and torso of this same body of technologists.

Simply Business considered this fact and compared global opportunities for startups outside of the Bay (and of course charts SF in the mix).

Inspired by venture capitalist Mark Susters’ public positions on startup hubs, Simply Business sought to take a look at the wider tech community to see how cities like their own (London) compared to the Bay. Using data from AngelList – a network where startups and investors convene – added in a dash of LinkedIn data on talent, and created an interactive graph which they say “reveals some fascinating insights that might shift some perceptions.”

Check out the fully interactive graph below:

The best opportunities for startups

Simply Business indicates that the Bay and NYC offer the greatest opportunities for startups seeking investment, while noting that Seattle and Singapore have strong investor to startup ratios with impressive talent pools.

The best opportunities for startups who aren’t seeking funding and are focused on attracting talent are found in cities with the highest ratios of developers to startups and a low cost of living. This puts Bangalore and New Delhi squarely as opportunity centers, yet Boston, Dallas, Denver, and Seattle fare well also.

The best opportunities for investors

By comparing the number of startups to the number of investors, L.A. and London beat out San Francisco with more favorable conditions. Further, Atlanta, Bangalore, and Toronto appear to have less competition for investment opportunities.

The best opportunities for developers

Simply Business reports that by charting the number of startups against the number of developers in each city, it appears that NYC and the Bay are the top cities for developers. London and L.A. are closely behind, while Austin, Berlin, Chicago, Paris, and Toronto also rank highly as attractive for developers.

“This short summation just scratches the surface,” said Simply Business on their blog, “and there’s many more interesting insights our research threw up.”

You can view the full interactive graph above, and filter it depending upon the specific data you’re searching for.