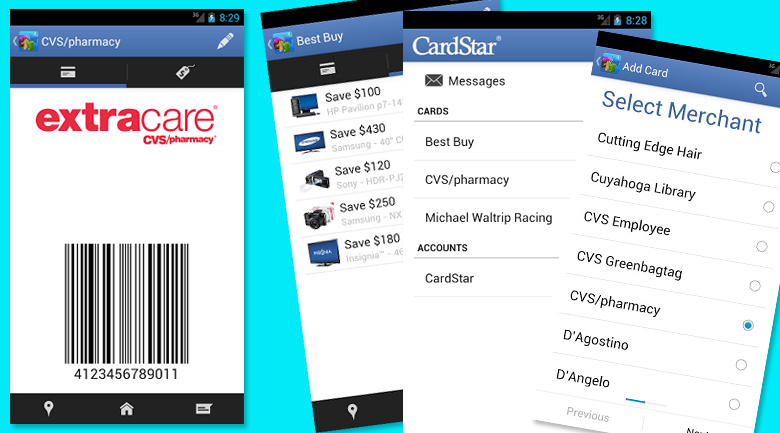 It can be quite frustrating to arrive at a store where you’ve had a loyalty card for years, but you left it in the pile of cards on the counter at home because it was making your wallet too fat. It’s unrealistic to either perfectly plan all shopping trips and carry the appropriate loyalty cards, or to carry every single loyalty card at once. In one fell swoop, CardStar solves the problem with an app that lets you scan in (or type if scanning doesn’t work) all of your loyalty cards in a secure environment that generates the bar code on your phone to be scanned in the store. Adios, loyalty card stacks.

The app is free and not only helps consolidate rewards cards and membership cards, but gives shoppers access to coupons and deals from local merchants. It is a tremendous benefit for shoppers, but merchants of all sizes can get involved as well by signing up their loyalty program and use geo-targeting to send deals when shoppers are nearby.

The company says the app offers retailers and various merchants the ability to engage and retain customers by adding the ability to measure their results through the app, rather than being excluded just because they’re not a Fortune 500 company.

CardStar has apps not only for iPhone and Android, but for the Windows Phone, BlackBerry, and even Nokia so shoppers are not ignored just because they aren’t sporting a 2013 version of the latest gadget.

Read also: Top 6 trends for mobile use and growth

CardStar as a mobile trend

CardStar’s consolidating powers is not just helpful to shoppers and merchants but points out the broader trend of streamlining not only peoples’ work lives through technologies, but their personal lives as well. More importantly, though, it rides the trend of showrooming (comparison shopping inside of a store via smartphone) by helping retention of shoppers rather than losing them to the hot deal online.

One study uncovered that over half of all smartphone owners in America used their device to perform retail research while inside a store in 2011, which illustrates the emergence of savvy smartphone shoppers who bring online shopping behaviors in-store. By the end of just 2011, nearly one in five smartphone users scanned product barcodes and nearly one in eight compared prices on their phone while in a store, a trend that is accelerating at a rapid pace.

Smartphones aren’t going anywhere and merchants should be considering ways to fight showrooming, one of which is loyalty cards and offering hot deals, which CardStar helps to do.