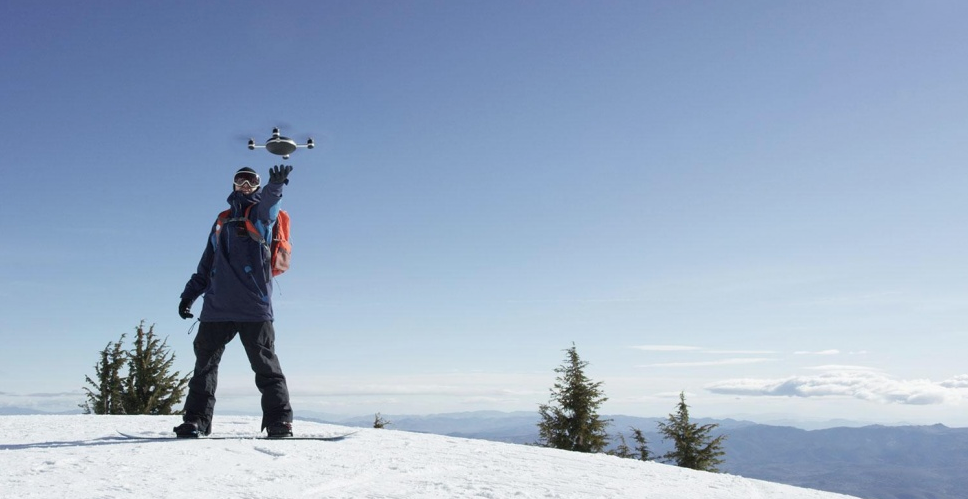 Introducing Lily: a “throw and go” camera that flies through the air and follows you around, allowing adventurers to film or photograph themselves skiing the slopes or kayaking through white water rapids. Gone are the days of Blair Witch style selfies and bad home videos. With Lily, you can take professional quality films without a Hollywood film crew.

This brain child of the UC Berkeley robotics lab looks like a flat helicopter with a cute, blue-eyed face – the eyes glow to let you know she is ready to fly. Using computer vision and GPS to follow a wearable device, Lily forgoes so the need for a remote controller.

However, you can check her battery, view a live stream of the video footage, and change Lily’s flight pattern using an accompanying smartphone app. Lily can follow behind you, lead in front of you, or can fly in a circle around you. She films in high definition, and can also film in slow motion.

Lily flies up to 25 miles per hour, and can film you from a minimum distance of five feet and up to 100 feet. She’s an all-terrain robot who floats and is waterproof, although the manufacturers recommend rinsing her after saltwater exposure. She can fly in winds up to 15 mph, and, at 10 x 10 inches and just 2.8 pounds, she can easily fit in your day pack.

Two hours of battery charge will give you 20 minutes of flight time. Your tracking device will blink when Lily is about to run out of batteries, but she’ll be sure to gracefully land before she runs out of juice.

Get creative with Lily

In this article:drones, lily, Video