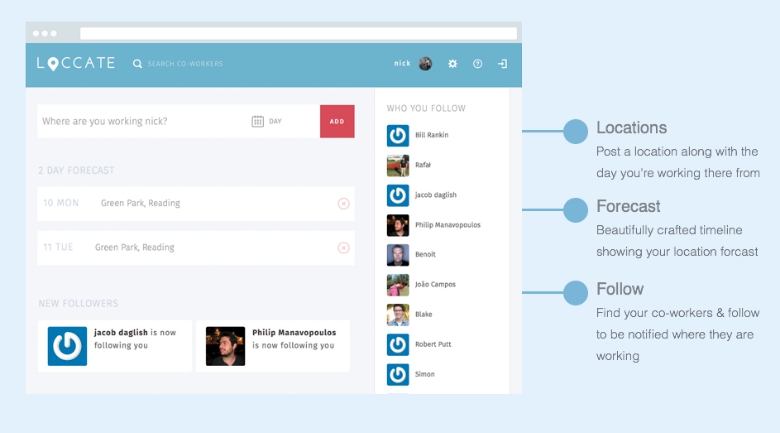 Keeping the team at a glance

For small businesses, optimal efficiency can be the difference between growth and bankruptcy. This means making cuts where money doesn’t need to be spent, downsizing office space, and outsourcing jobs to apps and startups rather than initially hiring. In lieu of complicated office arrangements or multiple secretaries, then, small businesses should consider turning to one of the most efficient up-and-coming location tools: Loccate.

Though it lacks the immediate communication-based connectivity of other similar apps (such as Tassuru, which we wrote about earlier this year), Loccate more than makes up due to its sheer simplicity—both functionally and visually. A literal timeline shows a location forecast, allowing others to plan accordingly.

It’s also worth noting that having everything arranged in chronological order is a huge relief to the data-processing parts of our tired, tired brains. In addition to the clear-cut scheduling, the Loccate site has very little in the way of nagging visual noise, allowing you to check in and check out quickly and efficiently.

A quick look at Loccate’s site reveals three crucial points they wish to reinforce: lack of a shared calendar, mobile access, and the ability to track your coworkers’ position. No calendar means no need to revise and re-share your timetable with colleagues—instead, you can operate on a day-by-day basis on an app to which everyone you work with has access.

The ability to update from your car, couch, or favorite tea house adds to the efficiency of this app. Finally, the tracking—the centerpiece of this tool—allows you to coordinate with your coworkers, eliminating redundancy.

Obviously, there is serious potential for this app to be abused at the expense of staff privacy. A series of regulations regarding its use would have to be implemented before it could be applied (for example, clocking in and out of the app—signing out when not actively working, etc.), but this is a small price for management to pay in order to take advantage of such a smooth-running system.

At the time of this writing, Loccate’s official site is offering early beta access.