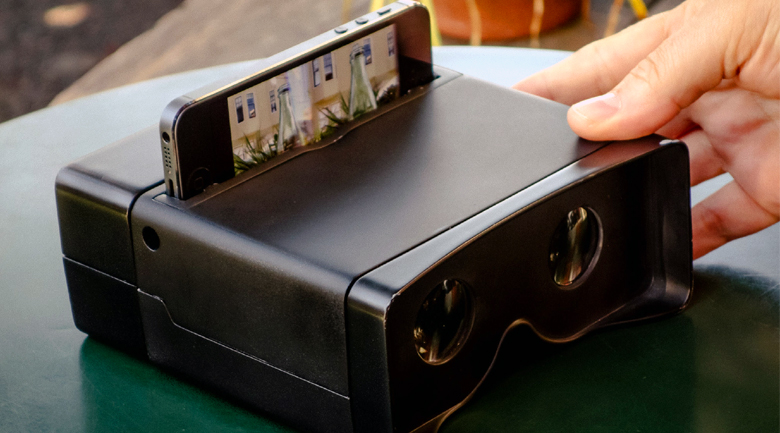 Poppy is currently a product design idea put forth through Kickstarter. Inspired by the Viewmaster, Poppy creates a case for your iPhone (or fifth generation iPod Touch) that allows you to take 3D videos without batteries. It uses fiber optics as a power source.

To capture the images, Poppy uses a system of mirrors that split the field of the iPhone camera’s view so that two images are captured simultaneously. The viewer built into Poppy then isolates the images, as the Kickstarter pages states, “so your right eye sees the image taken by the right mirror, and the left eye sees the left image. Your brain fuses the two images into a single, three dimensional scene.”

Poppy will have an iOS app, too

Poppy creators, Ethan Lowry and Joe Heitzeberg, also state that there will be an iOS app to go along with the Poppy. The app will capture 3D images and stills, save videos and stills to your iPhone’s photo album, allow you to upload your footage to YouTube, and enable you to browse your own 3D content, as well as, other 3D videos available on YouTube. It will also feature easy controls and navigation for when your phone is placed inside Poppy.

Using Poppy will be as simple as slipping in your iPhone, twisting the front of the Poppy, and capturing in full 3D. You will be able to instantly play your videos back in the device, as well as share them with friends. You can also post them on YouTube, as it supports 3D. If you want to watch them on television and you do not have a 3D screen, you can use the classic red/blue glasses to get the 3D effect.

Pricing not yet set

Yes, it looks a bit retro, but I choose to think of it as more of a conversation piece. The price of the Poppy is not yet decided, however, since it does not need batteries or anything else but your phone to run, the price should be fairly affordable.

According to the product’s Kickstarter page, they hope to have the product out to backers of the product in December and hopefully soon after to the rest of the consumers.