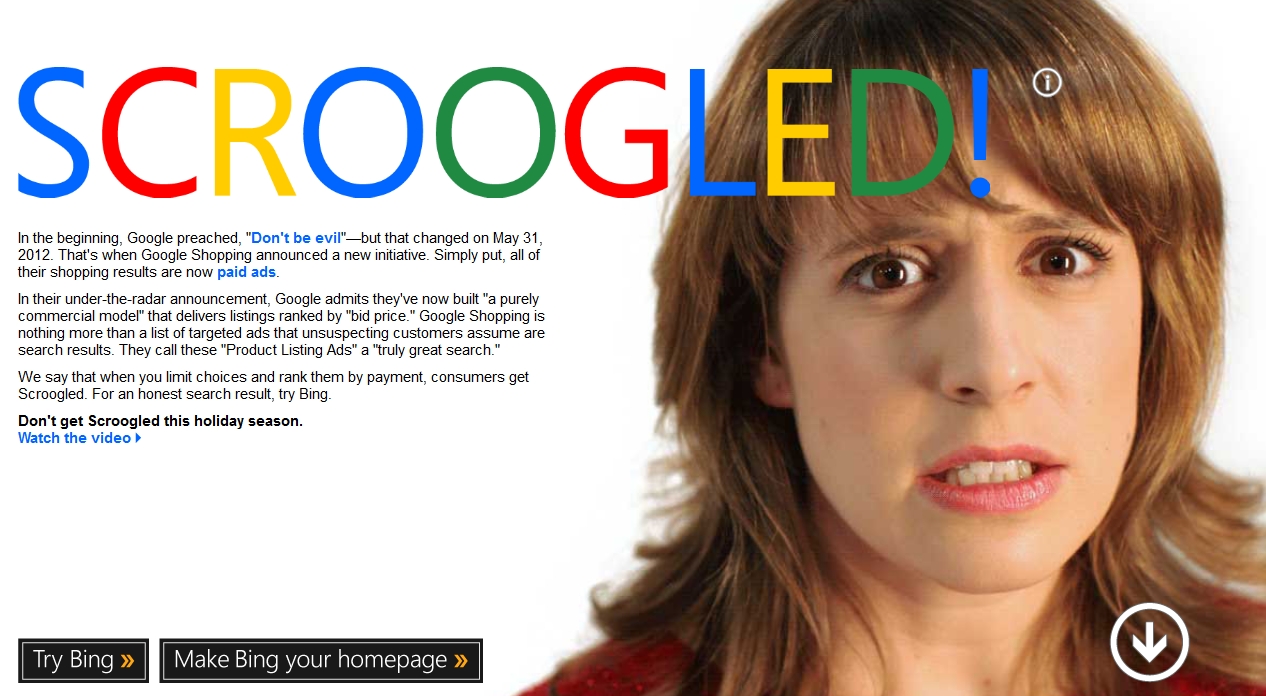 Microsoft Bing has launched a national television ad campaign, coining the term “Scroogled” to garner attention for their own search engine. The campaign attacks Google’s recent updates to Google Shopping which now features paid results, and the politics behind the pay-to-play versus organic search results is heating up.

What is most striking to us is that this could end up being the first successful attempt to explain search engine optimization (SEO) basics to a mainstream public that is almost universally online through social networks and are gaining a common understanding of how the web works, even at an elementary level.

Critics would likely say that this campaign unfairly preys on consumers’ long standing fears of the internet, particularly with results and reviews and perpetuates consumer distrust. Supporters will point out the flaws in Googles pay-to-play search results when compared to Bing’s results based on an algorithm rather than whose wallet is fatter.

“They ‘scroogle’ you,” says Bing

“Sure, they say your search is sorted by relevance, but the truth is, Google sells their shopping results. They ‘scroogle’ you by defining relevance as how much they’re getting paid,” one of the two video ads says, both of which are featured on Scroogled.com which is where ad viewers are pointed to in order to learn more. In the ads and on the site, Bing is positioned as the “honest search.”

The story behind Google search

Microsoft Bing’s ad takes aim at Google’s recent shift from Google Product Search which listed merchants for free to Google Shopping which became paid-only listings, announced this spring and launched in October. Google Shopping uses payment as one of several factors used in ranking search results, and when users click on a product, all the links to shopping sites on the page that follows are sponsored.

PCWorld.com reports, “As the Associated Press points out, Bing gets some of its own listings from Shopping.com, which accepts payments for inclusion. When I asked Microsoft PR about this, I got a statement from Stefan Weitz, Bing’s senior director, saying that Bing includes both free and paid listings, but doesn’t rank merchants based on who pays. Bing also doesn’t let merchants bid on a higher ranking. Google, on the other hand, does factor payments into its shopping search results.”

Technology writer Jared Newman summarizes, “In other words, Bing’s approach seems a bit cleaner than Google’s, but even it doesn’t tell shoppers which results come from paid listings. Neither side is as pure as they’d like you to believe, and as I wrote originally, the end results can be tough to distinguish anyway.”

While Google’s shift indicates a break with their origins which were completely organic, and results are primarily driven by dollars, Microsoft’s assertion of being completely honest and unpaid is not exactly a truth either. The search engine wars are heating up again, with Microsoft Bing going on the offensive, and perhaps the winner will be based less on actual practices and more on consumer trust of results.