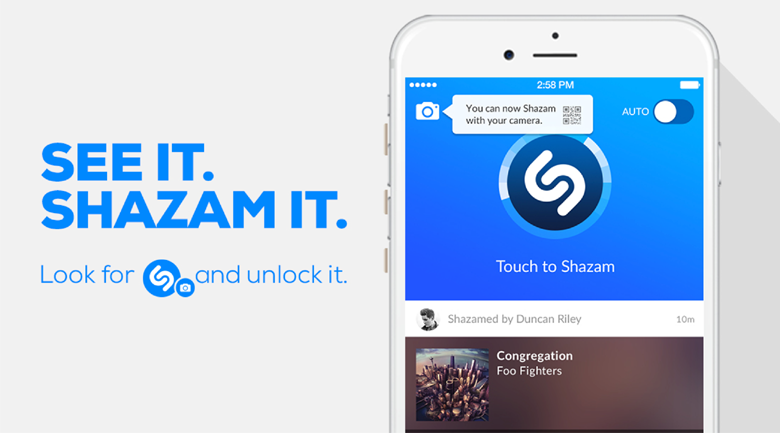 Shazam with your cam (is what their tagline SHOULD be)

In December of 2008 I got my hands on the device that has defined the last few years of technology – the iPhone. The first generation of the iPhone quickly came and went but I was lucky enough to use this beautiful, little device before upgrading to the 2, then the 3, and so on.

I remember setting up my phone for the first time and getting excited about the plethora of apps that would be available to me. After getting my phone ready to go, I logged into the app store for the very first time, knowing exactly what I wanted my first download to be.

Shazam, an app used for song recognition, was the first application I had ever downloaded onto my smartphone. I was astounded by the technology and that it could simply identify a song by recording only a few seconds of it.

With Shazam, I would scroll through every radio station and would use the app to identify song after song. The app would even link the song to the iTunes store and would give you the option to purchase the song or album.

And, as the iPhones have evolved, so have their apps. Shazam has moved from simple song-recognition software to being able to link with television commercials and movie trailers.

Next gen Shazam is a game changer

Now the app has taken on an entirely new form of “impressive” with its visual recognition software. Shazam’s website shows off their latest advancement with a display of the app recognizing the QR code on a magazine advertisement for Disney’s new film “Tomorrowland.” The app recognizes the code within the ad and then links the user to a trailer for the film.

The app links with your smartphone’s camera in order to identify codes AND photos. Shazam has partnered with The Walt Disney Company, Esquire, Warner Bros., Target, Time, and The Wall Street Journal in order to make sure app users have something to ‘shazam.’

Shazam, developed in 1999, currently has over 100 million active users per month and has identified over 15 billion songs to date. This new innovation of visual recognition is allowing Shazam to open a door to new and exciting technological opportunities. Imagine holding up your phone to any billboard or logo and Shazam recognizing it and sending you to that brand’s desired webpage, instantly. Game changer.

In this article:iPhone, Technology, voice recognition