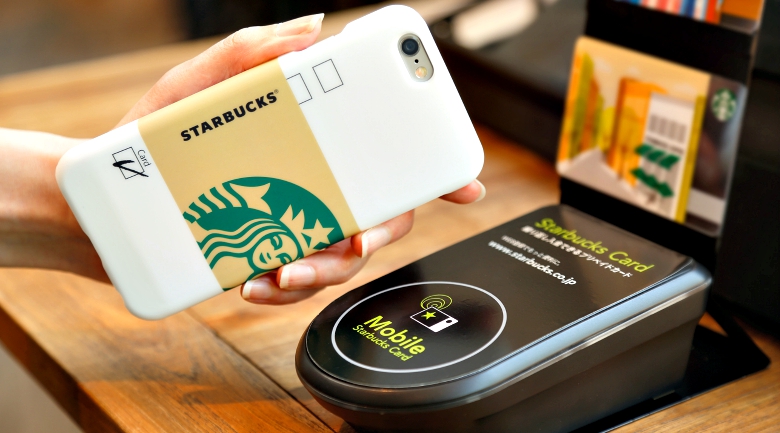 Committed caffeine addicts in Japan now have the opportunity to get their coffee fix with a quick tap of their smartphone. Starbucks Japan has teamed up with men’s fashion design company Uniform Experiment to create the Starbucks Touch. It’s a cell phone case for iPhone 6 that doubles as a gift card. You simply preload the gift card with cash or your credit card, and then next time you go for that latte, you can pay by simply tap and go.

Read also: Starbucks and Spotify team up so you can earn reward points

The Starbuck Touch debuted early this month and retails for ¥ 4,000, which is about 35 US dollars. The case has a colorful pattern of rainbow squares one side, while the other side is designed to look much like a Starbucks cup with its signature cardboard sleeve.

The app also allows you to pre-order your joe

The accompanying app can also be used to pre-order your coffee, so that you don’t have to wait in line at the store. Starbucks Touch is currently only available in two stores in Tokyo, and so far Starbucks has not announced whether or not the innovative cell phone case will be sold in y7Europe or the United States.

Regardless, Starbucks stores in the US are attempting to incorporate more smartphone technology. In 2009, select stores began allowing customers to order and pay for their beverages over a Bluetooth connected network.

A similar app is available in the U.S.

In late 2014, Starbucks launched its iPhone app, Mobile Order & Pay, in several of its coffeehouses in Portland, Oregon. The app allows customers to pre-order and pre-pay for their beverages and snacks before they get to the store. The app gives the customer an estimated time when their order will be completed. When they arrive, they can skip the long lines and the barista will have their order ready at the pick-up counter.

The app also tracks your order and payment history, so you won’t forget the delicious new flavors you’ve sampled, and you’ll be able to reference your order in case there is a mistake.

What this tech means for Starbucks and other brands

These new technologies are designed to simplify and speed up the order and payment processes and will hopefully help cut down on one of Starbuck’s customers’ biggest complaints – the endless lines and long wait times. Connected customers can get in and out of the coffeehouse and get on with their day, and the busy baristas can move the lines along with greater efficiency.