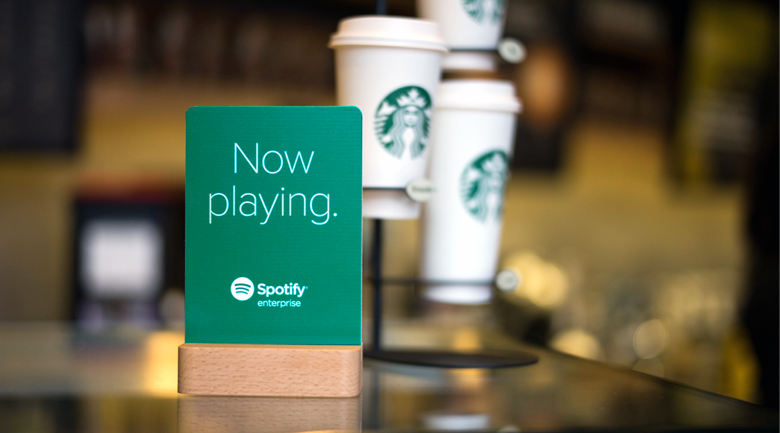 Starbucks gets creative with new partnership

While the mediums through which it has played have grown and changed throughout the years, music is something that has always been a constant in life. The evolution of music-playing mediums has been a fascinating journey, one that continues to impress.

The trend today is app-based services that provide a plethora of music at your fingertips. One of the most popular of these apps is Spotify, which offers music for everyone.

Spotify is now teaming up with Starbucks after the coffee powerhouse recently dumped CD sales, which they have famously sold at their counters for years.

This two-part team is collaborating on what is known as a “music ecosystem” where baristas at each individual Starbucks have a say in what is played. The baristas, along with other Starbucks employees, will have access to Spotify’s premium subscription.

A multi-year deal that is more than a jukebox

Starbucks and Spotify have created a multi-year deal that will allow the streaming service to create playlists suited for Starbucks customers. Coming this fall, employees and customers will begin to select the songs that fill the air of the famous coffee shop.

In addition, Spotify will be incorporated into the Starbucks app, allowing listeners the opportunity to collect Starbucks’ reward points as a part of the collaboration. The Starbucks mobile app offers a rewards loyalty program and will develop what is called “Stars as Currency.” This is the first time in history that Starbucks is allowing a third party to integrate with their program.

Through this “ecosystem,” customers will be able to suggest songs for playlists, giving the whole idea a sort of DJ feel. The process will begin in the U.S. and will then make it’s way through Canada and the United Kingdom.

Will the program have an impact?

Starbucks has always had a strong focus on music as they began selling CDs in 1994. The company even developed a music label with Concord known as Hear Music and signed Paul McCartney to a CD in 2007.

The concept is interesting and is seemingly a good step for Starbucks (especially in light of some locations being forced over the years to endure some horrible reggae music or screeching alt rock artists). However, Starbucks is a place where people grab a quick coffee while often on their computers or listening to their headphones. It may be difficult to get customers engaged with song-selection.

In this article:spotify, starbucks, Tech