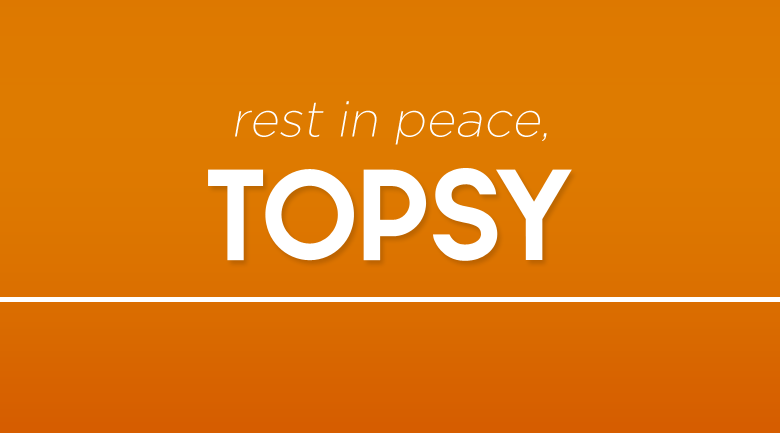 If you visit Topsy.com, expecting to use the internet’s favorite social media analysis service; brace yourself for disappointment, as you will be redirected to a page on Apple’s website promoting it’s iOS search tool, instead.

That’s because this month, Topsy, officially died a sudden, and tragic death.

Read also: Apple and Mercedez-Benz get cozy over CarPlay

The unanticipated death of the 8 year old company, comes only two years after Apple Inc acquired it for $200 million.

As soon as Apple made the purchase, users were curious how they planned on using the analysis tool. But, Apple stayed quiet about their plans, and still today, has never publicly revealed why they made the purchase.

Some believe the technology was used to overhaul the “Proactive” tool for iOS 9, which searches a user’s apps for information; while others believe Apple is using Topsy to overhaul iAds, the ad network for Apple software. Whatever its intended use, users definitely didn’t expect this.

Born in 2007, the adored service provided a comprehensive index for every tweet ever published since Twitter’s birth in 2006, all for free. The first, and few of it’s kind.

Which is why developers are scrambling to offer alternatives to the recently deceased. NewsWhip published a post promoting Spike, it’s new self proclaimed Topsy alternative, which is similar in that it gives users the ability to search Tweets, but costs $299 a month. Buzzsumo, is another similar service charges $99, and Unmetric $490 a month, unheard of for the Topsy fan’s who loved it because it was free.

Rumors, but no clarity

At only eight years of age, Topsy, made it’s way into hearts everywhere, providing services Twitter itself should be able to, but cannot. There are many rumors about why it shut down, and hopefully, more details develop and clarify, but one thing is certainly true: