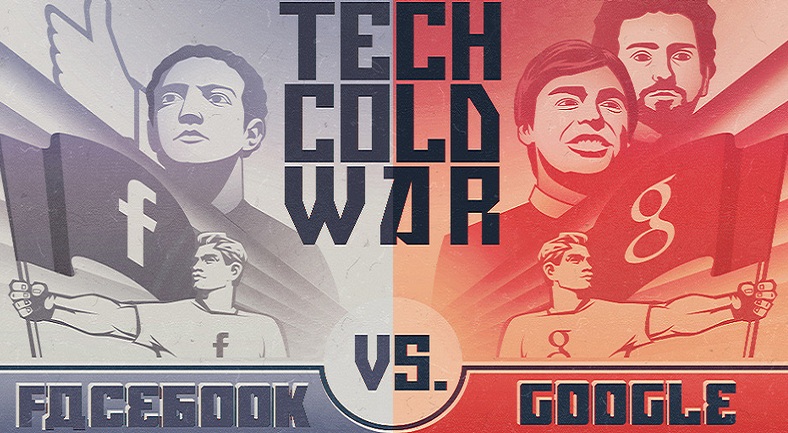 Google and Facebook are at war and have been for years. They are spending billions on apps and specialists. The tech giants are jockeying for control of the digital world. It’s as if Facebook and Google are now combatants in Silicon Valley’s version of a Cold War arms race. The new “Cold War” isn’t about tanks, missiles, or doomsday machines; it’s about commanding your attention and becoming your preferred social media platform.

Perhaps the beginning of the war stems from their own philosophies: Facebook believes in giving “people the power to share and connect;” whereas Google believes in “doing no harm and making information both accessible and useful.” Google has acquired 146 companies versus the 46 Facebook has acquired. Facebook’s market cap rests at $147 billion, compared to Google’s $367 billion. The “Cold War” began in 2009 and continues today.

Read also: Why job hunters today have more luck on Facebook than LinkedIn

In 2009, Facebook began by acquiring Friend Feed for $50 million, which gave them the added capabilities of offering a news feed. Around the same time, Google acquired Ad Mob for $750 million, which gave them the ability to offer mobile advertisements. In 2010, both companies made additional purchases: Facebook acquired Friendster and Google acquired Slide. 2011 brought several additional acquisitions for both companies, allowing the war to rage onwards. You can see the rest of the acquisitions in the infographic by WhoIsHostingThis.

Google has a financial advantage

Looking at these acquisitions and figures though, it is clear that Google has a financial advantage. They have enough capital to make a few mistakes in acquiring companies and not feel them as deeply as Facebook might. In the tech world, it is hard to imagine staying on top for any length of time; things are constantly shifting and changing and adapting to these constant changes can be difficult.

While other companies are trying to compete for dominance as well, Facebook and Google continue to raise the stakes. Facebook has Instagram, WhatsApp, and Oculus Rift. Google has YouTube, DoubleClick, Motorola, and Nest. Microsoft is in the arena with Skype and Nokia. Yahoo! is trailing behind, holding on to Tumblr.

Only time will tell if these two tech giants can hold their places at the top of the heap. Will Google finally put Facebook out of business? Will one acquire the other? It will be interesting to see whether or not Facebook’s recent acquisition of Oculus Rift can breathe new air into their gaming and augmented reality plans, or if Google will remain the leader of the tech pack.