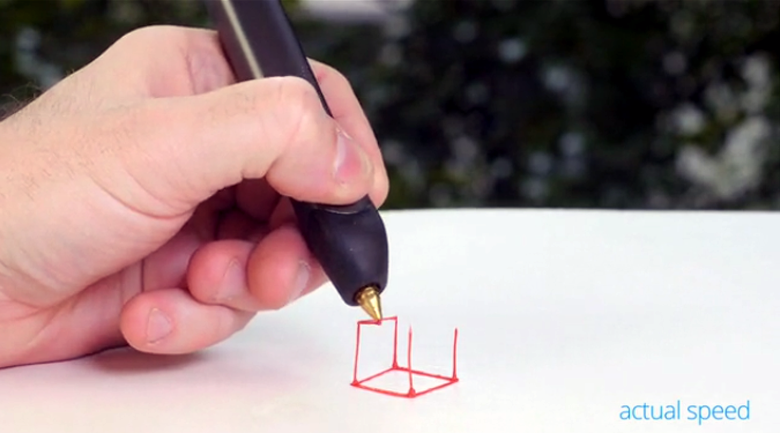 Art is plenty cool as it is, but I think we can all agree that from the days of carving things into stone and cave painting with animal blood, it’s come a long way. And thank goodness it has, for the animals’ sake. The physicality of actually putting a pen to paper has become less and less necessary, and altogether less practical, as computers have overtaken our society at every turn.

I mean, I’m typing this article on a keyboard, and I’m a writer. A monumental reason why our trusty writing tools have become outdated is because of the surfacing of various computer programs in which you can design three-dimensional objects and structures. Combining the authentic, primal satisfaction of holding a pen and that undeniable mad scientist feeling of creating something in 3D, our good friends at WobbleWorks have up and changed the game.

Picture a hot glue gun, shaped like a pen, that draws solid lines. I know it sounds crazy, but this triumph of the new age of technology melts plastic inside of it, which cools once it flows out of the tip into solid sticks. And no, it won’t burn your hand – there’s a fan built into the body to help the plastic cool and keep your hand from liquefying. It was already innovative as it was two years ago, in my humble opinion, but its creators decided it wasn’t quite advanced enough for their taste.

Wobbleworks is launching a Kickstarter for a brief time to raise $30k for a new and improved model of the pen, which shouldn’t be that tough considering they raised 2.3 million bucks for the original version back in 2013.

Aptly named the 3Doodler 2.0, this instrument rocks an aluminum casing and can use two types of plastic filaments. The fan system was overhauled as well, resulting in more efficient airflow, a quicker drying process for the plastic, and an altogether quieter experience.

Personally, even if this thing cranked out as many decibels as an approaching train, I’d still want to give it a shot. One of the coolest things about this creation is that you don’t have to download or program anything to use it; you just draw pictures. In the air. And then they’re objects. Insane.