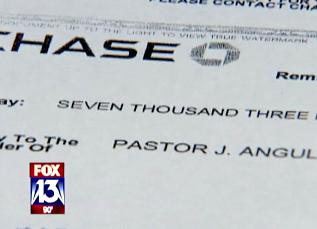 Stephanie Bonefont of Riverview, Florida has owned her home for 11 years which is now paid off, but the single mother is stuck in a legal battle with her HOA. Bonefont’s lawyer says the HOA is double dipping and Bonefont says, “they’re making off like bandits, getting paid twice for this house. Meanwhile, I have to buy it three times.”

In 2008, the HOA began mailing threats of foreclosure if she didn’t pay her dues and ultimately foreclosed on the home for $7,400, all without her actually receiving any notice, rather, she learned from the new owner who knocked on the door of his new home. A judge reversed the sale because notices had gone to the wrong address, but Bonefont still had to pay the new owner $7,300 in order to get the deed back in her name.

The HOA alleges the fines are still unpaid despite her paying the new (and now former) owner of the title to her home and are demanding she pay again or they will foreclose yet again this Friday as allowed by a local judge.

Bonefont’s only recourse may be to shell out another fat check. “How many people has this happened to that are too afraid to fight that can’t fight?” she said. Realtors representing consumers on short sales and foreclosures are finding themselves in tricky situations like that of the man who bought the home then had the foreclosure reversed- it’s not just the big banks that are complicating the housing sector.