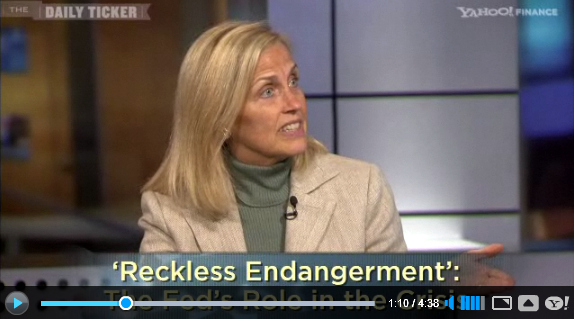 Incest between Wall Street and the Fed

Do you remember the “too big to fail” crisis? Remember the talking heads on cable news debating whether or not the banking system in America should be bailed out or allowed to fail and rebuild? Well guess what? Here comes round two, according to economists Gretchen Morgensen and Josh Rosner on the Daily Ticker as featured in the video above.

It seems that since the banks have been bailed out, everything is on the right track, but Morgensen and Rosner look back in time and see parallels to today, pointing to the continued “incestuous relationship” between the Fed and Wall Street which enabled the first crisis which resulted in a bailout.

The Fed “failed to oversee” the banks and we’re just now learning about a secret $80 billion fund for banks back in the spring of 2008 with some suspecting that more details will leak this year about the bailout.

Former Federal Reserve Chairman Alan Greenspan has already publicly admitted that the “fatal flaw” that required bank bailouts was self regulation and Morgenson and Rosner say nothing has changed.

They note that originally, we grew “too big to fail,” so the government consolidated the banks and the belief was that they shouldn’t be too closely regulated not only because profitability was being misinterpreted as the banks being sound and that if they were punished for misdeeds, they would fall and the entire economy would be destabilized.

The authors say the psychology is now that the Fed is pretending there isn’t a problem in the name of economic stability. Because of this, they predict the banks will go back to taking more risks because of a lack of oversight and the cycle starts all over again.

So they say we’re back in the exact same situation, so what’s next? Will the Fed go back to Congress asking for another bailout in the name of economic stability or will the President keep his promise that no more bank bailouts will happen and let them fail on their own merit and rebuild?

Tell us in comments what you think the best course of action is- let the incestuous relationship continue in the name of economic stability or take on the challenge of letting the fail-worthy banks fail and building a new foundation from there?