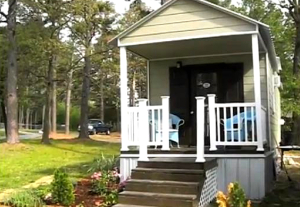 Years ago, before they had a child together, Debra and Gary spent nearly a decade in South America in tiny homes common to the area. When they came back to the States, they noticed how big the average American home had become, but rather than question, they began accumulating “stuff” as Debra calls it, enough to fill a 2,000 square foot home on an acre and a half of land.

In 2008, Gary was laid off and the two of them both held down two jobs to afford their mortgage. The pressure became too much and they began considering their options and began selling their belongings in preparation to downsize. As they were shopping around for options, Gary saw a Craigslist ad by Slabtown Customs who specialize in “tiny homes.”

The couple considered their former South American life of efficient living and decided it wouldn’t be a major sacrifice to get back to that, plus Debra always had an affinity for Mississippi shotgun homes.

In six weeks, they had a fully custom built “tiny home” shotgun house where they now live with their home-schooled teen. The $15,000-$20,000 investment meant they now live mortgage free, and they now operate a baby gifts business together in the custom office built feet from their front door. They pay roughly $150 per month for the land and exist with very little overhead.

Could this become a trend?

People are being encouraged to walk away from their homes by late night infomercials and this family is not alone in getting laid off. With the amount of uncertainty on the market, could shotgun houses become a widespread trend?

It is unlikely that the big box houses will take a big hit, but it is likely that in pockets of America, shotgun houses could be the alternative to renting for people willing to downsize. Even though the homeowner in the video focuses on what she has rather than what she doesn’t have, but her tone was more apologetic than proud as she gives the tour and while that could be her personality, even she hesitated to share with friends and family their purchase choice. In the proverbial housing hierarchy, the stigma around shotgun houses seems to trend more negatively than renting. For this reason, it is unlikely it will become a trend and as the economy recovers later this decade, shotgun houses will become rentals and homeowners will move back to the big boxes again.

But where does this leave a Realtor? In the same position as now- a few agents in the nation will likely see an opportunity to specialize and make a decent living from it, but as for the rest of the industry, most people will never hear of these shotgun houses outside of this story.