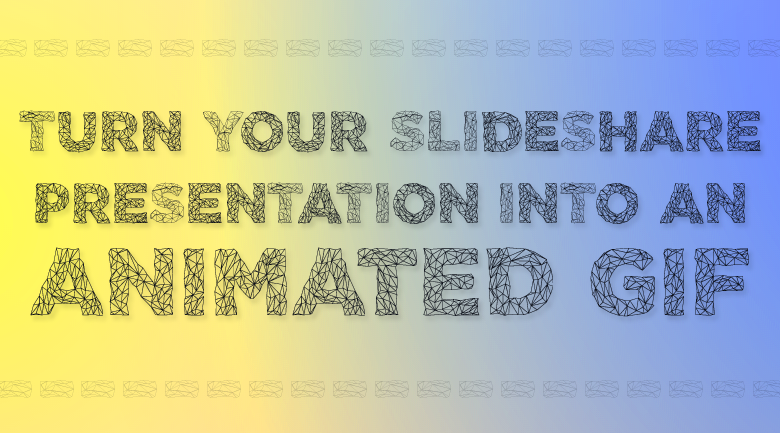 From PowerPoint to animated gif

If you want to add some excitement to your presentations, or more realistically, you’re simply looking to put together an animated gif with meaning that spices up your website, there’s a new tool out there that does just that with a few tiny clicks.

Enter GifDeck, developed by one of SlideShare’s developers in Delhi, which converts a PowerPoint presentation uploaded to SlideShare into an animated GIF.

All you do is copy and paste a SlideShare URL into GifDeck, and it quickly generates an animated GIF.

“I made GifDeck mainly to scratch my own itch,” says the site creator, who developed the tool over the course of a weekend. “I wanted to send across a presentation via email on an internal mailing list, and just showing its thumbnail wasn’t enough.”

Next to the section where you paste the URL, there is a grey tool icon – clicking that gives you control over the speed of the animation, number of slides you want to include, and other controls.

Once generated, just save the image to your computer, and use it in a blog post, in an email, or even on Twitter (which began supporting animated GIFs many months ago).

But wait, there’s a caveat

There is a caveat – if something is uploaded in a format other than a standard presentation, it won’t work. For example, LinkedIn recently posted a long infographic outlining the most InDemand employers, and GifDeck doesn’t slice and dice and turn it into anything animated, no, it remains one long single image.

Further, if you attempt to use a URL that is a SlideShare video rather than a presentation, it won’t generate an animated gif, it just gets stuck (or at least it did when we attempted to convert the “Lemonade War“).

Below are several animated gifs generated from the site, all on the original speed set, so we advise altering the speed of your presentation, and it should be noted through example below that small fonts don’t convey well, nor do light fonts on light backgrounds:

In this article:animated gif, Marketing, Presentation