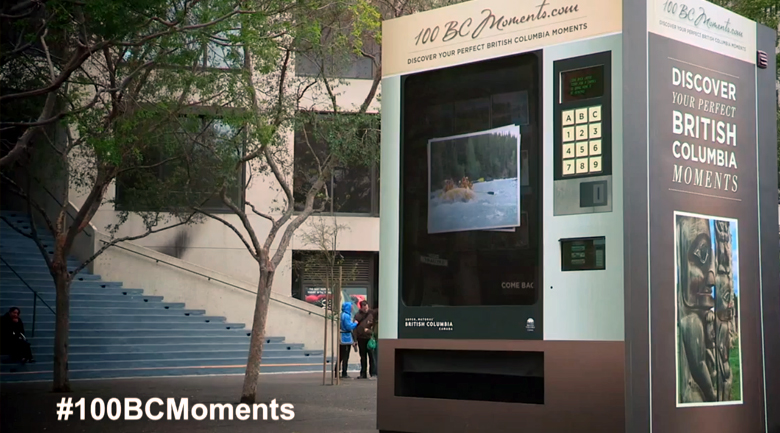 Tourism British Columbia placed a 14 foot tall and 10 foot wide vending machine in the middle of Justin Herman Plaza in San Francisco for several days to capture the imaginations, and more importantly, the attention of people passing by. Instead of junk food and sugary sodas, the giant interactive vending machine spews out bicycles, kayaks, surfboards made in BC, and more!

They call it the “BC Moments Machine” as part of its “100 BC Moments” campaign which encourages travellers to experience what BC has to offer during the summer, promoting tourism for this and future seasons.

It appears they had staff on hand (or even inside the machine!?) to hand out glossy, well designed flyers with “BC Moments” numbered one through 100 on them. The promotion was so successful, that at many times, there was an extensive line in front of the giant vending machine, and people clapped as new items popped out.

The creative campaign took minimal funding when compared to say, a Super Bowl ad, and they tied in social media nicely by having a hashtag (#100BCMoments) and their Twitter account not only tweets the “BC Moments” but for retweets, enters people into a drawing for a free BC vacation for that winner plus up to ten friends.

While the impact is not international, their creative use of high impact rewards for low work got the crowd excited and buzzing, and quality videography gave them promotional pieces to use on YouTube to be picked up on digital sites like this. While most people didn’t hit a “buy” button while standing in the crowd, the loyalty for those who were wowed is likely to be extremely high, and it is very possible that quite a few people will walk away with plans to visit BC either this summer or in the future.

For more video on the thrilling three days:
[ba-youtubeflex videoid=”BHOT6gyOcgM”]

In this article:Guerrilla Marketing, Marketing