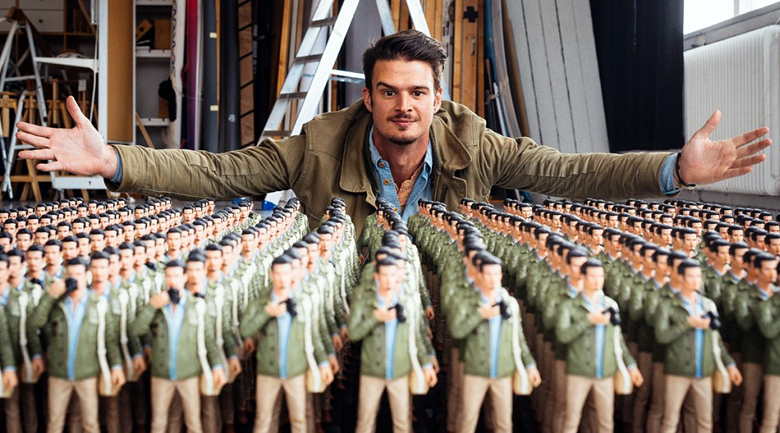 Swedish photographer, Jens Lennartsson calls his mailing of 400 “GI Jens” action figures of himself “the most epic self-promotion ever made in the history of photography,” releasing videos detailing the process and unpackaging of the figures.

Read also: NeverWet is invisible paint seen only when it rains

Sending to potential clients, Lennartsson says of the action figures, “Many photographers spend a lot of cash to design the perfect portfolio, print it and send to the people they want to work for. Just to have it disappear among hundreds of similar mailings. If you’ve ever been in touch with an art director, art buyer or owner of an ad agency, you’ll know that they have a zillion things to do and as many people to meet. Unless you make an epic impression, you’ll be forgotten. I needed more than a paper folder to stand out.”

Is this an effective campaign?

While it is certainly clever, is it effective? We would suspect that not only his campaign behind the figures, but the actual memorable nature of receiving the figure in the mail sets him apart. These “GI Jens” come in a box, brag about his skills and assets which include having “a really good camera” and being “loved by nine out of 10 art directors.”

Lennartsson asserts that his campaign is reflective of exactly who he is, “a raw natural lifestyle and travel photographer, without too much gear and Photoshop.” From conception to the mailbox, the figures took nearly a year and a half to complete, also proving his dedication to detail and long term projects.

Other brands, particularly in the creative industry, will likely take note and reconsider how creative their methods of reaching busy people are, and while action figures won’t become the universal norm, standing out is incredibly important, and done through creative means like the #GIJENS project.

In this article:Marketing, photographer, self-promotion