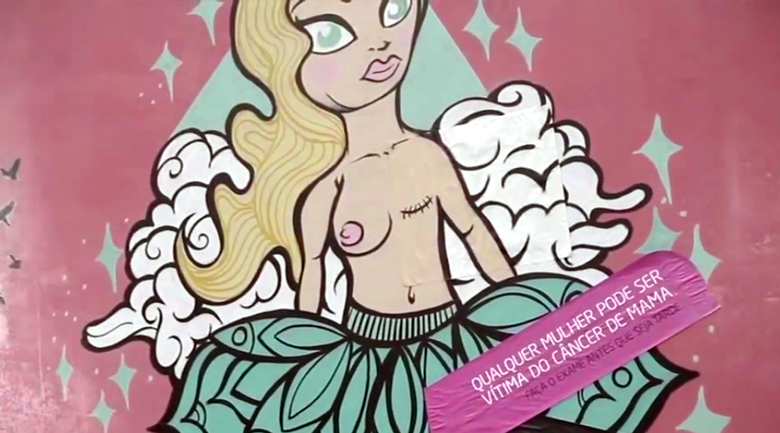 Everyone knows of those special areas in town where graffiti is prevalent. Some of it is beautiful, so much so, that it is easy to understand why people finally consider it to be art. São Paulo based, AC Camargo Cancer Center, has made use of graffiti in a brilliant way.

Since topless women are frequently a subject in graffiti in the area, the Center searched the city for graffiti featuring these women and gave them make-overs. Using customized stickers, they altered the artwork to make the women appear as if they had mastectomies to remove one of their breasts. While the make-over was temporary, the message was permanent: mastectomies leave lasting emotional, physical, and mental scars.

In this campaign, titled: “Tinta contra o cancer” (“Paint against cancer”), graffiti artists allowed the nude women in their work to be altered. Each work of graffiti used in this campaign received the tagline, “Qualquer mulher pode ser vítima do câncer de mama.”

In English, this translates to “any woman can be a victim of breast cancer.” Accompanying this movement are signs about the “Outubro Rosa” movement and the hashtag #LigaDoRosa. Breast cancer is most prevalent among women and in Brazil, according to data from the National Cancer Institute (INCA), there have been an estimated 52,680 new cases in 2013.

Early diagnosis is the key; if found early, the chances of a breast cancer cure exceed 90 percent. This awareness campaign is a tasteful, artistic way to emphasize how important it is to get checked for this pervasive disease.

Your brand can learn from this campaign

Not only was this an effective campaign for the Cancer Center, but also, it is a great example of using what is available as marketing tools. Marketing does not have to be expensive. This campaign used what was readily available in the neighborhood to get their message across. Not only did their message reach the women they hoped to help by getting them to come for preventative screenings, but it also reached men and adolescents, who many times are affected by a member of the family having the disease.

The simple act of turning graffiti into a meaningful message may have helped save lives, without costing the Cancer Center much money. This is a principle that you can apply to your own business. There are many ways to get your message, business, and ideas across without spending much, and they may prove to be more effective than more costly options.