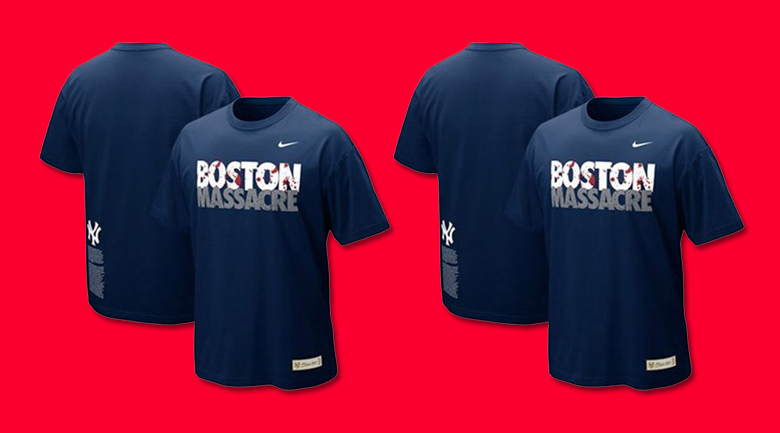 Nike seems to see dollar signs in any slogan it can print on a shirt no matter how poor taste the phrase might be. The blood-spattered Nike t-shirt printed with the words “Boston Massacre” the company recalled this week after the bombings in Boston (although the slogan was printed prior to the national tragedy) is not the first time the company has had to distance itself from its own products. Overall, it may speak to an ongoing problem in celebrity/sports culture.

So, the New York Yankees and the Boston Red Sox have a big rivalry. Everyone understands that and for the most part, it is usually not worth pondering the somewhat juvenile lengths some people go in their passion and rhetoric for their favorite teams. It is mostly just for fun.

In 1978, the Yankees beat the Red Sox several times in a row and in a play on words referring to the Boston Massacre of American colonists by British soldiers in 1770, the sweep of victories became referred to by the phrase. That is kind of weird in and of itself and doesn’t show the greatest judgment of those who used the phrase, but that all happened in 1978. Still, today Nike has a shirt in its stores talking about something that happened 35 years ago to make money from Yankees fans.

Most of the time, the combat, war, and violence references  used to describe sports contests are likely harmless analogies to a much more serious matter. But at some point the industry that profits from perpetuating that language and perspective has a difficult time unraveling itself from its own language when things go bad.

“I am the bullet in the chamber,” read the slogan on Nike ads featuring Oscar Pistorius who has since been accused of shooting his girlfriend dead.  A couple years ago, Boston’s Mayor Menino wrote a letter to Nike asking them to stop selling shirts promoting drug use alongside sports. Nike finally distanced itself from Lance Armstrong after evidence of his drug use became overwhelmingly convincing.

And then there was “Just Do It” and Tiger Woods. Just kidding.

When will they learn?

When, though, will Nike and other companies learn? If they believe their positive slogans promote positive ideals and the sale of their products, what do they think their violent slogans do?

As a company develops its identity, messaging, and associations, it should think ahead to the worst possible outcome of its decisions. Those running companies cannot run around all the time scared about how someone, somewhere might be offended by their every action, but they can be smart. Just don’t do it if you can imagine a plausible scenario during which you will be sorry for the actions of your company. 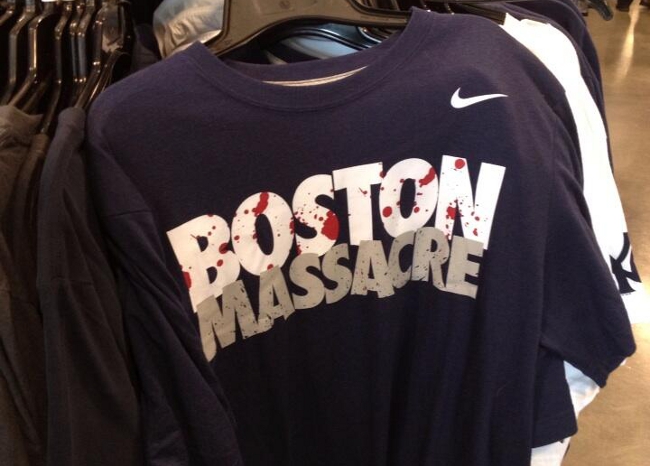 As Nike pulls “Boston Massacre” shirts, eBay users are fetching high dollar for the shirts as they are no longer available through traditional retailers.