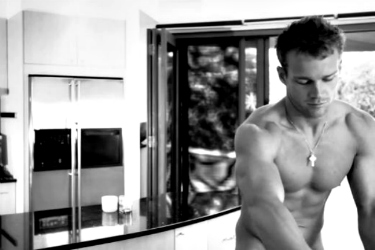 Two weeks ago, we reported that an Australian property video would soon be released featuring nudity and while that’s nothing new, featuring male nudity is extremely new. PlatinumHD.tv videographers in Australia have carved out a niche of high quality videos/movies about luxury listings on the Gold Coast and are some of the few videographers that appear to actually have fun with their work- scripts, actors, models and luxury listings coming together to form beautiful and appealing video.

The above video is shocking not only because it pushes the limits of what is appropriate by featuring a nude male model, but it stands out in a world of starched shirt old school Realtors, where nudity (and certainly featuring religious iconography during a nude scene) is not likely acceptable. The risqué video breaks every rule in real estate marketing, but does it really break any rules of marketing other products like razors, beer or hotels?

We’ve long written about PlatinumHD.tv and they’ve risen in fame for using scantily clad female models, action videos about a listing, featuring a terminally ill homeowner in a video, and they are not new to the world of controversy, in fact, they have made a name for themselves based on the controversies associated with their property videos.

NEO Properties who commissioned the film said, “In 1972, Australian womens’ magazine CLEO shook the pillars of the advertising and media worlds when actor Jack Thompson appeared nude in the centre fold. Almost 40 years later, NEO does a CLEO. With 80% of home buying decisions influenced by women, this is one for the girls. No butts about it! Well. Actually, there’s plenty of butt as hunky Canadian male model Ryan Burke takes a stroll through two levels of 92 Savoy Drive, tucked away in Broadbeach Waters, on Australia’s beautiful Gold Coast.”

But will this sell a property?

While the above video will surely get countless hits and consumers watching it several times in a row (just like many of their other videos), some will ask if this sells a property, and we look to the proven success of their past series of videos that broke the so called “rules” of real estate video – NEO’s luxury listings appear to sell quickly.

While the video is shocking, it actually brings commercial quality video to the world of real estate in a way that is modern – the broker and the video company have brought real estate video into the 21st century by not limiting themselves to the rules of stuffy real estate while still adhering to global advertising and marketing “rules” that say sex sells. Although some will find it to be distasteful, the high end market on the Gold Coast has proven not to be adverse to these tactics and while video like this would not likely work in rural or suburban America, it could work in progressive metro areas. We anticipate that NEO and Platinum will continue to push the envelope and pull real estate marketing into the 21st century, even if it is drug along while kicking and screaming.