But combine all of these elements, and you have a Realtor advertising his services during the South by Southwest conference in Austin, Texas, which is well known as a driver for people relocating to the city (“oh I love it here, the vibe is so cool, let’s leave Portlandia and caravan to the ATX!”). Not that we’re bitter. But to the point – Yoni Levin at J.B. Goodwin took to the streets to advertise his services to a famously eager-to-move audience.

The image above was captured by Josh Rubin, a CNN Producer based in Austin and tweeted with the words, “Dude’s either gonna get rich or get shot. #sxsw”

While it is unlikely that anyone would get shot in Austin, drunk people may take it upon themselves to harass. But Rubin’s statement remains hilarious and true-ish.

While we have reached out to Levin several times for comment, his phone has gone directly to voicemail, which we suspect is either from a barrage of hate calls or a landslide of new business. Either way, stationing himself on the famous 6th street with a simple banner is pretty clever.

When we hear from Levin, we’ll let you know what inspired him to make this move, how long he’s been downtown with his sign, whether or not he’s been shot, how many leads he has garnered, and if he will be back to do the same thing next year. Stay tuned.

Sidenote: this guy is awesome. He is a SPECIAL AGENT. Here’s his business card as proof (you can’t PAY for that kind of facial and head hair): 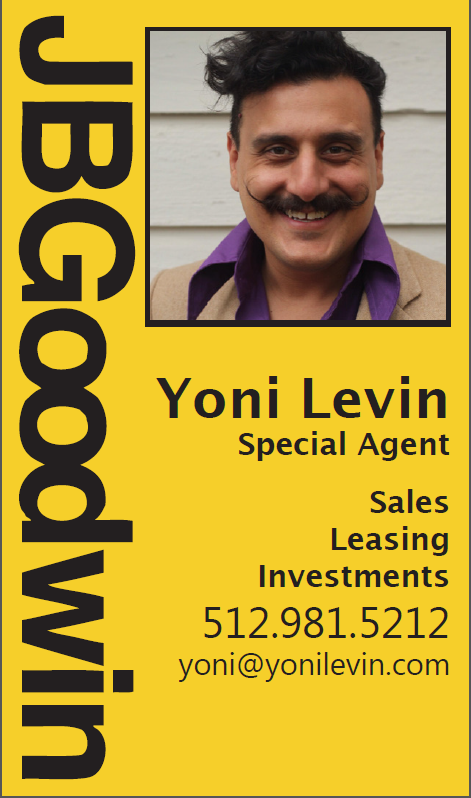 In this article:Marketing, Realtor, SXSW