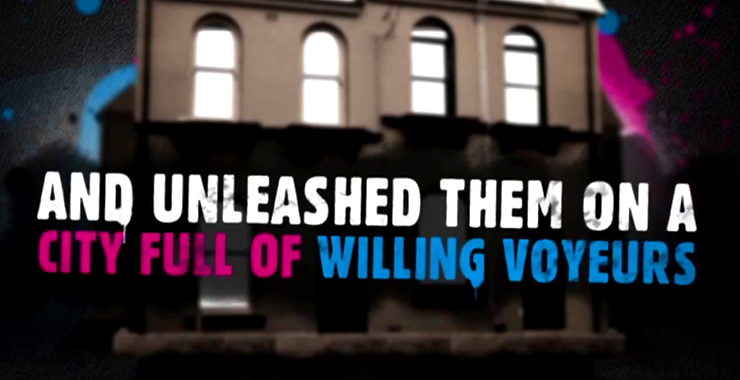 Passerby in for a treat

What do you get when you put sexy voyeuristic videos on giant LCD screens in a vacant house in a part of Sydney with high foot traffic, have gorgeous ladies in tight black dresses outside of that building handing out hot pink and neon blue sunglasses, and tout the world’s first invisible advertisement?

You get crowds of people stopping to spend time interacting with an advertisement, even the bicycle cops passing by. In the video above, Lynx body spray and deodorant (which appears to be the Australian counterpart to Axe in America) drew in crowds and made for a hot video out of sheer creativeness.

While reactions will vary between Australia and America, the campaign works for a few simple reasons. First and foremost, Lynx draws people in with mystery – not all ad campaigns involving mystery are quality, take for example the extensive television ad series by Yellow Wood that are little more than self indulgent Western short videos that are 25 years past their prime.

Secondly, the Lynx stunt is sexy. The images in the windows include oddities, but the focus is easily on the couples fooling around, which is consistent with the brand’s sexualized image and message – use this deodorant, you won’t stink, you’ll smell great, you’ll hook up. The polarized glasses allow passerby to pretend like they’re looking in the window with the goofy monkey, but we all know what you’re staring at, Australians. Hot.

Third, engaging passerby is a difficult task, but Lynx not only managed to get it done, they did so without promise of prizes, fame, being on video, or anything other than getting to watch an invisible advertisement. Yes, Lynx used hot girls to lure in people to put on glasses in the first place, but the company managed to get people to interact organically – think of it as your website… You want people to come in, poke around and remember your brand, not keep walking by, right?

Using props, sex appeal, and the element of surprise, Lynx made quite a hot ad campaign. Can you replicate this with your brand? No, copying usually flops, but you can emulate it. Think of the fun that you can offer – instead of a standard booth at a conference, think of how you can get people to interact with your brand and stay longer (hint: conversions are never hurt when a quality campaign draws people in to spend time with your brand). Can your company produce a 3D video playing on a loop at your booth that passerby must use the 3D glasses with your logo on them to view (that they can of course take with them, since conference people love swag)?

There are ad execs who specialize in viral campaigns, but if you are wearing every hat in the company, think of ways to be memorable – at the local fair, get the smallest booth, set up a tripod with a video camera, sit on a stool, make a big sign saying “free high fives courtesy of [your company],” and film yourself giving free high fives in which you yell your brand name every time you high five people passing by. Or, if your offices are downtown and you offer services instead of products, put up a new hand drawn message on a poster in the window of your office with love notes to your city every morning; photograph them and make a montage you release on your blog monthly.

You don’t have to have sexy models and polarized glasses, but on a budget, you too can get creative and make people remember your brand – what will you do to think outside of the conference booth box?