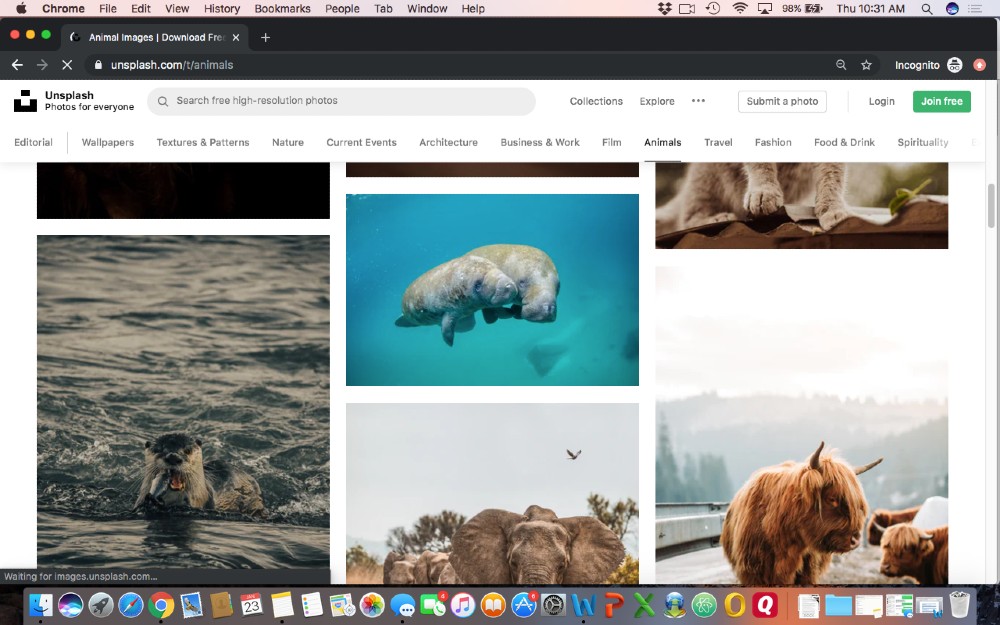 I really can’t stand seeing the same thing over and over again.

He’s a cutie, but I can only see that surprised toddler in the pink shirt and gray vest so many times. And I guarantee at least 85% of people reading this know exactly which baby I’m talking about, hence the issue I’m having.

That’s where Unsplash has been my friend.

I was introduced to the image search engine in my last job: hundreds of thousands of hi-res images for 100% free, which yeah, was just my boss saving money on subscriptions to pay for our office snacks. But I was pleasantly surprised by the cool stuff I could find!

How it works is; well first, pretend you’re a photographer. One amongst many. And you specialize in, say, bomb ass macrophotography. Except the people who need your services A: Don’t know the difference between your specialty and someone who can use the zoom button, and thus B: Aren’t finding your portfolio because they don’t even know what they’re looking for.

If you’re willing to let people use some of your photos, you can host images on Unsplash, tag them with keywords, and ideally get some subtext or alt-text credit.

Now pretend you’re writing for a nature blog. Justifiable crackdowns on unpaid intellectual property mean that when your client says ‘Just pull some stuff from Google, it’s whatever’, you’re not actually going to do that. But there’s no budget for a subscription to anything, so what now?

You check out Unsplash is what. Then you find that macrophotographer’s amazing pictures of leaves and such, and bookmarking their gallery gives you a way to harmonize all the preview images you use for the ‘5 Most Ominous Things I’ve Found in the Austin Greenbelt’ article you’re working on with everything else on the site.

As a master manipulator of text/feelings myself, I’m also really into the fact that since anyone with a camera, anywhere in the world can host their images, I’ve got a lot of diversity in styles, locations, and of course human subjects. I really enjoyed that I could look up ‘CEO’ and find a Vietnamese woman and a Canadian man sharing the first page and probably a complicated relationship with France as a concept.

And I noticed something else.

Quite a few of these images were branded! As in Harley Davidson, Boxed Water, and more have Unsplash accounts, with their products on display to be used whenever people look up words like ‘freedom’ and ‘quirky’ and ‘hydrate’.

You literally can hire a photographer to take pictures of people in various situations wearing your brand of pillbox hats, and get photos of your product placed any and everywhere!

Now of course there are a few wee drawbacks.

Credit isn’t guaranteed, so whether you’re a brand or a photographer, you may not have your name on your work when it’s displayed, especially on preview images.

You also won’t be notified as to WHERE your photos are being used, so if your properly gloved and be-pillboxed gals end up photoshopped with digital Sharpie mustaches and used in an anti-fancy fashion postpunk op-ed, that’s out of your control.

On the searcher side, the AI is a little off as you scroll through. You might be distracted by photos of fighting racoons being auto-tagged as dogs hugging, and lose time laughing and taking screenshots, and then explaining why you’re posting to Tumblr during work hours.

Still worth it, by the way.

Ultimately Unsplash has been my ace-in-the-hole when it came to advancing the radical left agenda by viciously adding different ages, races, and settings to my last gig’s newsletters, and it’s another great resource for anyone in the ‘get/KEEP your name out there’ stage of business.

Hitch up your water wings, dive in, and make an un-splash!

In this article:business news, image search, The News