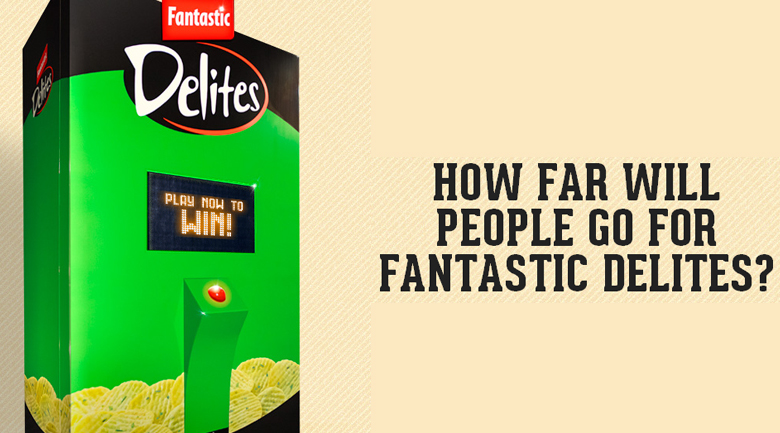 In Melbourne, Australia, a vending machine was set up overnight this month, but not just any vending machine – an interactive machine that offers free treats for stunts that get more complex each time someone presses the magic red button. The challenge is not only to raise brand awareness of what we had no idea is a brand of chips (silly Americans), and go viral.

While the video is nowhere near viral status, the company filmed from inside and outside of the vending machine, showing how far people were willing to go for free treats, ranging from dancing, pushing the button thousands (yes, thousands) of times, to bowing down to the chip diety. The clever advertising stunt drew a crowd, and with each demand it made on the button pusher who wanted treats, they recipient and crowd got more rowdy – there were shouts and hugs when a girl pushed the button 5,000 times for a free box of chips, while the first person who only had to hit it 100 times simply took her box and quietly walked away.

How can your brand launch something this clever? Examples:

Guerrilla marketing (or ambient marketing) is a growing niche that few firms have mastered, but when done well, as the Delite-o-matic does above, people get excited over free things like a box (bag?) of chips, and are willing to embarrass themselves in front of others.

While your brand may not have the budget to pull of a stunt as complex as the Delite-o-matic, consider ways that you can interact with your consumers and tap into the crowd mentality of noticing the ultra clever things you do to get their attention, above and beyond an ad in a magazine with your face that dryly says “buy my product.”

Perhaps you can uniquely present your product, as USA washing detergent did by sending out their product wrapped in a t-shirt. Maybe it’s going the extra mile for clients by doing latte art rather than simply pouring lattes, or as Julie Niehoff says on stage, bind your presentations uniquely, or when handing a retail customer a bag, add something special like a ribbon to the handle.

Also effective are the silly campaigns, like the Netherlands billboard campaign that threatened to expose an overweight nude man’s body if the billboard space wasn’t rented quickly. Other vending machine stunts have worked, like the recent vending machine that spit out free kayaks and locally made items to promote tourism, and the indestructible billboard that had passerbys punch it, posting their pictures on the company’s Facebook wall.

Guerrilla marketing is meant to capture attention, and is not always done so through thousands of dollars worth of advertising, but remember, those thousands of dollars for medium to large brands are tremendously inexpensive spends, as campaigns like the Delite-o-matic are filmed by all participants, shared in their social networks, and talked about, because they tap into what the consumer wants.