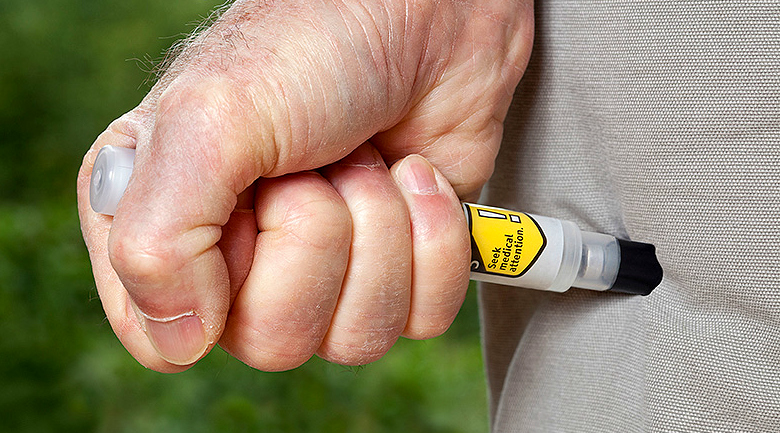 Last month, my girlfriend was doing some deep cleaning in our very moldy basement when her throat began to swell. Before she knew it, her throat had nearly closed, making breathing almost impossible.

Luckily, we had an EpiPen on hand. She injected herself, which gave her enough time to wake up the household so we could rush her to the emergency room.

Without the EpiPen, she likely would have suffocated and died.

The only product of its kind

EpiPen is an injectable Epinephrine, a life-saving drug that slows anaphylaxis from an allergic reaction. We always keep one on hand, because where I live, we have a lot of visitors, and a lot of bees, wasps, and venomous snakes.

Now that we’ve used up our supply, we need to replace our EpiPens, but that is proving to be unaffordable. My girlfriend is uninsured, and my deductible is so high that EpiPen will likely cost us between $300 and $600.

Mylan, the pharmaceutical company that manufactures EpiPen, which is the only drug of its kind available on the market, has come under fire recently for the skyrocketing price of the drug, which has increased 600% in nine years.

Mylan CEO Heather Bresch announced Thursday that the company would take “immediate action” to ensure that everyone who needs an EpiPen has one. She says they’ll double the eligibility for their patient assistance program. Some patients will get rebates. Programs will be expanded so that the uninsured can get EpiPen free of charge.

The company will also make it possible for patients to buy the drug directly from Mylan, cutting down on the price hikes that the company blames on middlemen.

Bresch points the finger at the insurers, wholesalers, and pharmacies that come between Mylan and the patient, saying these middlemen add hundreds of dollars to the price.

She blames the “significant burden on patients from continued, rising insurance premiums and being forced increasingly to pay the full price for medicines at the pharmacy counter.”

Meanwhile, skeptics continue to condemn Mylan for what Ralph Nader calls “greed on steroids.” They say Mylan is price-gouging because they have a monopoly on the market.

Hilary Clinton is unconvinced by Bresch’s explanations, saying “It’s wrong when drug companies put profits ahead of patients, raising prices without justifying the value behind them.” A Clinton campaign spokesman, Tyrone Gayle, was likewise unimpressed by Mylan’s rebates and patient assistance programs.

“Discounts for selected customers without lowering the overall price of EpiPens are insufficient, because the excessive price will likely be passed on through higher insurance premiums.”

With my high deductible, this is exactly the problem I’m facing. I can barely pay for insurance, and because I can only afford a high-deductible plan, I’ll be charged more for EpiPen.

Everyone plays their part

The fact is, the health care system is a house of cards, each card leaning precariously on all the others. Changes in any part of the system shifts the burden to the others. Although she’s sidestepping Mylan’s responsibility for the problem, I agree with Bresch’s assessment that “All involved must also take steps to help meaningfully address the U.S. healthcare crisis.”

In the meantime, we’ll be doing our best to avoid mold and venomous snakes.

In this article:allergy, EpiPen, medicine, Mylan, pharmaceutical, The News