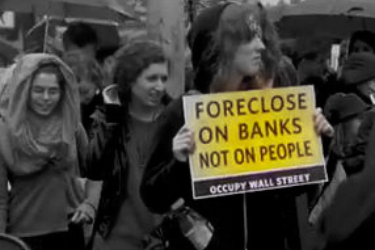 While the message of Occupy Wall Street has been disjointed at best, the message of the new spinoff movement, the “Occupy Our Homes” movement whose message is simply that banks got bailed out and continue getting backdoor bailouts (which we’ve covered in depth over the years), but the aide never trickled down to the taxpaying homeowners who bailed the banks out in the first place.

The movement has organized to fight back against wrongful foreclosures and if their message stays on target rather than fighting all foreclosures in general, they have a chance to make a difference with their movement. There is no question that the entire national chain of title having broken down through MERS’ program and a fraudulent robo-signature scandal that continues today have fueled the Occupy Our Homes movement.

Add to the poor finances of Fannie Mae and Freddie Mac who announced billions in losses this quarter yet requested billions more in aid, and hundreds upon hundreds of cases of homeowners illegally foreclosed upon and mix that with a growing unrest in the nation and you have protests on peoples’ door steps as seen in the CNN video.

The movement may have a quiet season, however, as Fannie Mae and Freddie Mac who back a bulk of America’s mortgages, are halting foreclosures from December 19th through January 2nd.

Will this movement be taken more seriously than Occupy Wall Street? If executed properly and in a serious tone that doesn’t sound like the chants of bored college kids, Occupy Our Homes could make a difference. While we haven’t been impressed with Occupy Wall Street, we get dozens of letters every week from homeowners begging for direction, that they have an offer in writing to remodify their loan so they can stay, they give the bank every penny they have, then they rescind the offer with no explanation, just a foreclosure notice. We get letters from people who say they paid cash outright and the bank has the wrong address, refuses to talk to them, and they are being foreclosed upon by a bank that never owned their loan.

Here is a short list of just a few bank misdeeds in recent history:

Because one in five homes is underwater in America, refinancing is difficult to obtain, and it is true that many people are giving up and walking away from their home for reasons varying from job loss to loss of a spouse, and these people haven’t been directly wronged, rather are victims of the economy. Those are sad cases, but the real tragedy is the homeowner who is being illegally foreclosed upon, or the homeowner who has paid for years on their home but find out the documents weren’t executed properly when they purchased the homes and they aren’t the legal owner and their homes are being taken back.

Will Occupy Our Homes succeed? If they take on the tone of Occupy Wall Street, probably not, but if they truly advocate for those who have been illegally foreclosed upon rather than those who simply cannot afford their home any more, they could be taken seriously enough to fight against all foreclosures, but we suspect they’ll take the blanket approach and lose steam over time and we bet they’ll pick fights with cops just doing their jobs that require them to serve eviction papers and get headlines the same way Occupy Wall Street has, and they’ll camp out with bongos and megaphones screeching generalities and cliches about the economy, and it won’t be fellow foreclosure victims, it will be disenfranchised youth confused about their message.

We hope we’re wrong. Sincerely, we do. We’ve covered illegal foreclosures for years and desperately wish for them to be eradicated, so we hope this movement stays precisely on target or they’ll just be more noise for bankers, politicians and television media to ignore or brush off as irrelevant.