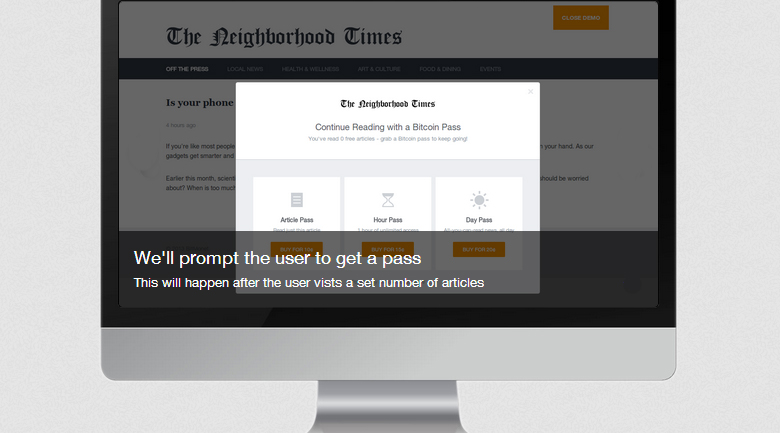 Bitcoin continues to increase in popularity as bloggers and news sites can now implement paywall technology specifically designed to accept the digital currency. BitMonet is an open source platform that site owners can use to require payment to access a specific piece of content, such as an article or blog post, or as a long term subscription-based offering.

Many news sites already have pay walls set up in order to monetize the web traffic that they receive on a daily basis, but now the arena will evolve to accept Bitcoin as well since the currency has grown increasingly popular. Bitmonet was founded by Ankur Nandwani, Bo Li and designer Valerie Chao; the trio and recently released the code for the open source platform at the end of August and reflect back on how this project first began at a hackathon.

“I was trying to solve this problem,” said Nandwani. “At the same time I was researching investment opportunities in Bitcoins by talking to people in the Bitcoin community, when this idea clicked to me and I ended up developing the prototype at the Bitcoin Hackathon.”

The Bitmonet app currently uses the BitPay API and will mainly cater to the publishing industry in its early stages. In order for Bitcoin to continue to grow, more businesses will need to innovate their business models to accept the digital currency so that it becomes more widely used.

Although the currency is popular, it can only be used in select platforms and websites and still has a way to go before reaching widespread adoption. Fortunately, the Bitmonet creators have instilled some flexibility in the app so that news sites can implement the app in a way that best makes sense for the business.

“Our goal behind BitMonet is to increase Bitcoin adoption. Hence we have made BitMonet free and easy to install,” said Nandwani. “It is completely customizable, giving the publisher complete control of how they want to monetize their content,” should they choose to charge per content piece or via a time-metered subscription.