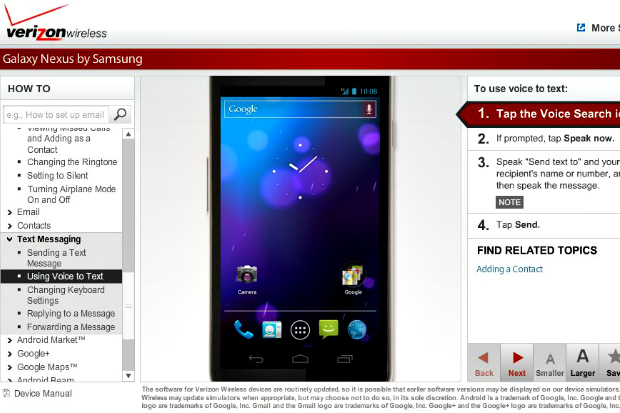 Testing a Galaxy Nexus on your computer

Whether you are in the market for a new phone or simply curious about what Android’s latest operating system, Ice Cream Sandwich looks like, Verizon has launched a website that allows you to test drive the popular Android smartphone, Galaxy Nexus. Earlier this month, we reported that Windows Phone 7 was offering an online test drive which is aesthetically quite different, but is the same theory of a growing trend to showcase devices online as they operate in the wild.

Most people visit a story to tangibly handle a phone, but will more manufacturers and carriers move toward online demos to push their online ordering systems as a cost savings measure? Or, is this more of a novelty than anything?

Verizon’s “Galaxy Nexus Simulator” launched today with a menu and on screen instructions to guide you – this could even be helpful to new Galaxy Nexus owners who have not figured out all of the functionality, and the simulator could be a great tool for anyone who is apprehensive about buying a smartphone in fear of new technologies. Face it, there is a level of embarrassment in picking up a smartphone and flashing a deer in the headlights look to an entire Verizon store.

It is noteworthy, however, that this specific simulator is only for the Verizon version of the Galaxy Nexus and may look differently on the devices at other carriers.

In this article:android, featured, galaxy nexus