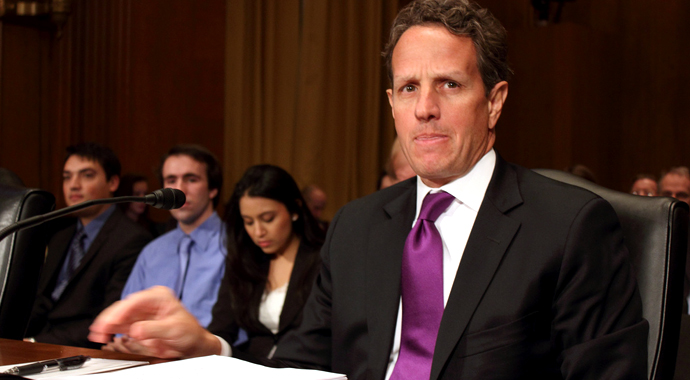 Before the Chicago Economic Club today, U.S. Treasury Secretary Timothy Geithner spoke1 on the topic of the economy, opining that the nation has a long way to go to reform and recover the housing finance system, where the government controlled Fannie Mae and Freddie Mac hold the majority of American home loans.

“The biggest source of unfinished business in the financial reform effort is in the housing finance area,” Geithner said. Much of his prepared speech focused on the major economic challenges, particularly noting that “President Obama inherited very large fiscal deficits, swollen to levels well beyond any experienced since World War II.”

Geithner added, “As we face the great political and economic choices ahead, remember how terrible the crisis was. Remember that Americans are still living with the damage that is the legacy of that crisis.”

Government infighting continues, however, regardless of any President’s legacy, as both sides of the aisle are tussling over how to wind down the government’s role in housing, particularly Fannie and Freddie whose conservator is the Federal Housing Finance Agency (FHFA). Geithner said Fannie Freddie are not “a source of systemic risk now,” as taxpayers’ funds have propped up the mortgage giants.

“We are much further behind in laying out the future path of reform in the housing finance system and what should replace those institutions,” Geithner said, echoing the growing sentiment that there are signs of a bipartisan consensus for reforming the housing finance market.

“We have successfully navigated the most dangerous phase of the worst economic crisis in generations. We need to bring the same creativity and force and sense of national purpose to the challenges ahead. And that will require better choices from our political system. No economy can be stronger over time than the ability of its political leaders to come together to make tough decisions.”