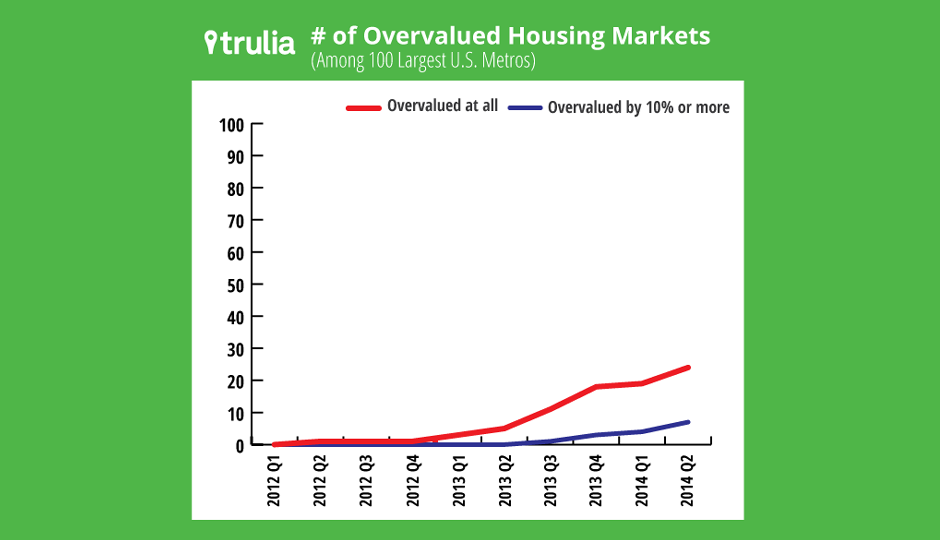 Although Trulia reports that prices of homes in America are still rising, the pace is slowing, and in fact, prices appear to be 3.0 percent undervalued. Still flinching from the recent housing crash, the world remains on the look out for bubbles, but Trulia asserts that we are at a lower risk of heading toward a bubble because the deceleration of home prices, adding that the market is neither overbuilding, nor over-lending.

Trulia’s second quarter Bubble Watch report tracks whether national and local home prices are heading back into bubble territory, and as previously mentioned, prices are undervalued relative to long-term fundamentals, but housing won’t look undervalued for much longer.

Regional performance varied, as always, and local prices appear to be overvalued in 24 out of the 100 largest metros, and in seven of those areas, prices are more than 10 percent overvalued. It’s no surprise that 75 percent of the most overvalued markets are in SoCal: Orange County, Los Angeles, and Riverside-San Bernardino.

What’s next for housing?

Dr. Kolko forecasts that home prices should return to their long-term norm – neither over- or undervalued – in late 2014 or early 2015 as prices continue to rise faster than incomes and rents.

“While the number of overvalued markets is rising,” Dr. Kolko said, “there remains little reason to worry about a new, widespread bubble forming. The last two years of strong price gains have been from a relatively low level and still haven’t pushed home prices nationally above our best guess of their long-term fundamental value.”

In this article:Breaking, Hot, housing, Trulia