Networking happens in many different situations. Not only should you network with other people in the same line of business as yourself, but more importantly, reach out to those outside of your circle, to build the relationships and make connections. Any gathering of people – put your networking skills to work!

Networking comes very naturally to me. As an Air Force brat who moved often, if I wanted to have friends and connect with people – I needed to reach out. I attended a Spark! Networking event in Philadelphia to support my friend Gloria Bell who was speaking on Networking 201. It was a very informative session and I realized by the audience reactions – that networking is hard for some people.

If you’re past the Networking Tips of “Don’t be shy”, “Make sure you dress with confidence”, “Meet five people” you might be ready to step it up a bit.

Here are some of my favorites that were shared along with a couple of my own: 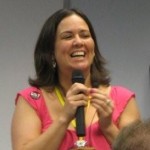