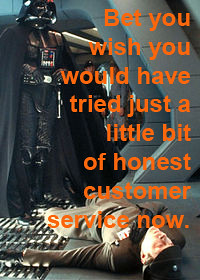 I was attending the Spring Meetings of REOMAC (The REO Manager’s Association of California) in Indian Wells California earlier this month. This event is one of two annual meetings of the Nation’s premier Default Management Organization. It attracts many members, and a number of wannabe REO specialists.

Many of these agents have determined that they are the next great thing to assist the mortgage industry in the liquidation of real property. So they come to these meetings to get face time with lenders who are frankly more concerned with dealing with the issues involved in asset disposition and loss mitigation then they are with meeting the “next new best thing”.

At the end of one panel I was talking to a long standing client when we were interrupted by a real estate professional who asked her if she knew that her agents in the San Diego market were stretched beyond their capacities and having difficulty handling their inventory. She politely replied that’s she was not hearing that from her agents. The agent then changed his comments stating that he had heard that from buyers and other agents. He then told her that there were missing lock-boxes, some properties without electricity, and that “her agents” weren’t returning calls from to her agents. She replied (with commendable restraint) that her firm monitored the work of their agents and the results of their efforts, firing any agents that didn’t meet their standards. He smiled at her and said, “That makes me feel much better, if you need more agents in that market, here is my card”.

A few minutes later, another agent introduced himself to her and told her about the bad agents in his market who didn’t return calls, and didn’t provide what he considered sufficient information in their MLS entries . He also complained that there often weren’t enough photos in the MLS, and a number of other whining criticisms. The lender’s representative explained that REO agents often limited the information they supplied to the MLS since they received very little information from the client, but had full liability for any information printed in the MLS. He nodded, smiled and asked if he could contact her in the future to see if he could list properties for her.

So This was a Strategy?

So let’s back up and figure out what the strategy was here.

These agents read articles about REO business. Since the market is slow and there are REO properties springing up in their area, they thought they should be listing them. Or maybe they paid for a course or bought an REO certification, and thought they were ready to find the clients.

They were spent some time and money advertising or prospecting or emailing mortgage companies, or attending REO functions. And then they finally met someone who actually assigns REO business to real estate agents. Their heart pounded furiously, their cheeks were red and flushed, the adrenaline is coursed through their veins as they stepped in past the throng of agents waving cards at their prey, and positioned themselves found face to face with a potential client. And each one did the same thing…

Having shown them that they (the potential client) are failing at their job (to hire and monitor agents for their firm) he went on to show them that he’s smarter then they are! So he provided them with his opinion of their agent to demonstrate that they (the lender client) misunderstand the job of selling real estate.

The next step was to indicate to them that they are so uninformed they don’t realize that their current agent is failing. And finally,because this agent is not only smart but generous, the final strategic move was to tell them that he was prepared to forgive the faults of his potential client and allow them to hire him, thereby remedying all of the problems they face in their marketing strategy.

It does however raise the question of why he would want to be associated with such a moron… Doesn’t sound like much of a plan does it?

I understand that foreclosure properties and short sales are seen as the best place for agents to go finding new business. There is a perception that it is easy to list bank owned properties, they require less maintenance on the part of the agent, you don’t have to deal with Mr. & Mrs. Seller, and the corporate client is an ongoing source of business which can make the successful REO broker financially more secure. The fact that these perceptions are only a small piece of the picture has little or no relevance to the burgeoning foreclosure specialist.

I’m not going to bore you with horror stories of checking occupancy and finding a hostile former mortgagor in possession of the property, or an outraged tenant who was clueless that there was a foreclosure in process. We don’t need to talk about trash filled, flea infested properties, urine soaked carpets, or the really tough, urban marketplaces where some of these properties are located. Those are part of the REO business, and if you weren’t aware that such things were part of the process, stop reading, find a post on something else, because this one isn’t directed at you (or read on to enter new territory and be dazzled by my wit and wisdom)

The truth is that REO business, while it has its own particular issues and needs is a good specialty in the real estate business, but getting started in it is not really different from doing any other piece of business. It requires a long list of tasks not included in a “regular” real estate listing, and financial commitments that some agents are unwilling or unable to make. But getting started in it requires a lot of cold calling and door knocking to meet corporate clients who are so busy handling their existing work load that increasing their circle of new friends is not real high on their”To Do” list. And with the current market, the competition for this business is even more intense then it is for “regular” real estate business. So it is understandable that when you meet an Asset manager you want to make the greatest impact possible in the short amount of time available to you. That however is not in itself any excuse for bad behavior.

So Here’s the Problem

You never make yourself look good, in either B2B or “regular” real estate by making someone else look bad. Your competition’s incompetence doesn’t make you more competent any more then their competence makes you an idiot.

Over many years as a trainer and as a company owner, I have shared an experience of mine that illustrates that point.

As an active agent, I called on FSBOs regularly. As part of that schedule I met on a particularly sharp retired electrician. Years before the Do Not Call List this man was so organized that he had a special unlisted phone line installed just so he could preserve his privacy while marketing his home. When this line rang, he knew it was an inquiry on his home and answered the phone appropriately.

I and two other agents were in the final consideration for listing the home when he decided to get professional help marketing the home. At the final interview, he asked me what I thought of the other two agents. I told him that I had nothing negative to say about either of them. I thought that they were fine agents, working for good companies, that would do almost as good a job as I would, but that in order for me to do my job, I had to believe that I would do the best job of any agent in the marketplace. I then asked him when he would be making his decision. He told me that he already had – he was giving me the listing.

Of the three agents he interviewed, the other two each one had something negative to say about the other, and I was the only person that had nothing negative to say about anyone. As a result, that night I listed his house,the next week I listed his daughter’s house and shortly after, sold his daughter another house (which I sold again for her several years later when I sold her the next home she bought).

I tell you this not because I was better then the other agents – they really were good agents, but we differed in one respect. I just never understood the idea of talking poorly about the competition. Maybe its an unconscious concern about Karma, or that what goes around really does come around, but the idea of promoting yourself by demoting others just doesn’t seem to me to be a good plan – long term or short term.

So What’s the Answer?

If you can do that, you really don’t need to trash the other person do you?