Comparing the top five search engines, Chitika set out to analyze one major search behavior – how many words consumers use to reach their search results, revealing that Ask.com has the highest word count per search across all of the engines.

How consumers search is critical knowledge for any company that relies on their web presence to generate leads or drive business. By comparing Google, Bing, Yahoo, Ask, and AOL, Chitika found that Ask.com users tend to type in the most words when searching, while AOL users type the least.

Below is their results for the month, based on search engine traffic from North America: 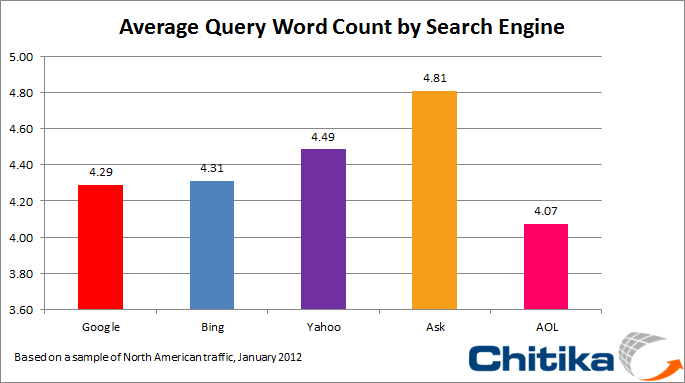 Chitika makes some assertions as to why there is such a difference in user behaviors, noting that Ask.com users encourage searches to be done in a user’s natural language while we would note that AOL users have been groomed to search concisely via keywords since the dawn of web time.

The study notes: “The most concise users in the search industry can be found on AOL.com, again following the same trend from our previous study. One reason for the succinct queries seen by AOL users may be related with the instant internal and external searching feature. AOL Search provides internal and external results at the same time to its subscribers, which covers most of its traffic. Users might become less verbose and more specific as their intent leans toward internal searches, which in turn could be the reason for their shorter queries. If this is the case, a possible decrease is expected for Google’s average number of words per query as users start using “Search plus Your World” feature, making queries more targeted.”

Search behaviors are changing rapidly with many trends being set by Google, the reigning champion of auto-completion which immediately alters a user’s search habits and could ultimately drop the overall number of words used when performing a search as natural language is less important than suggested results in the long run.