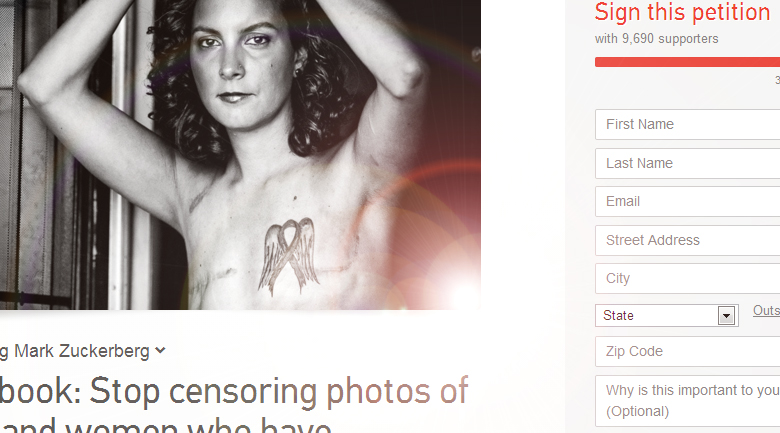 The photographer behind the SCAR Project told NBC News, “I can’t imagine anyone finding anything pornographic or sexualized or even offensive in any way,” as the portraits are designed to “put a raw, unflinching face on early onset breast cancer while paying tribute to the courage and spirit of so many brave young women.”

But in a knee-jerk reaction, Facebook removed many of the photos and the photographer was blocked from his account for 30 days, leading to a Change.org petition urging Mark Zuckerberg and Sheryl Sandberg to “stop censoring photos of men and women who have undergone mastectomies.” More than 9,000 people have signed the petition.” As of publication, 9,690 people have signed the petition.

Facebook has said that because they process so many pieces of content for terms of service violations, it must have been a mistake. Facebook has met with the photographer to address how to better process images that are flagged and the social media giant now says they support the SCAR Project.

Do you remember last year when photos of mothers breastfeeding were being removed by Facebook and called pornographic until nursing moms revolted and the social network changed its tune? This isn’t the first time Facebook’s screening process has been the topic of discussion and will not likely be the last.

While a strong stance against pornography is merited in an environment that allows minors, there are some images of the body that are not sexual in nature and are actually important to causes like breast cancer and breast feeding. It is likely that Facebook will be pushed to continue developing their terms of service to account for images of this nature.