In a bid to persuade users to spend more time on their page, Facebook is planning to release a feature that will consolidate notifications of all its apps in one single place.

Users will now be able to check notifications for Messenger and Instagram right from the screen of the Facebook app.

For users, this may mean the convenience of cutting down the time and annoyance of going between apps.
For Facebook, the gain is on longer user times on its app. 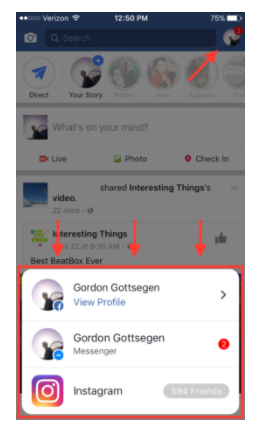 A new circle icon on top of the newsfeed will track all unread notifications. Tapping would reveal options to switch between Facebook and the two pages, Instagram and Messenger.
Facebook said in a statement to CNET that this is only supposed to be a small experimentation, which implies that not all users would have this feature available.

The new feature comes on the heels of Facebook’s launch of a new navigation option called “Order Food,” a food delivery feature, which lets users place orders—from selecting menu options to delivery—on Facebook’s webpage itself. As of now, Facebook has teamed up with Slice and Delivery.com.

The Facebook app also just underwent a makeover that saw a reorganization of the home screen, meant to ease navigation within the app.

To take advantage of the new features, Facebook suggested updating the app to its latest version, and to check for a circle icon in the top right corner of the newsfeed.

Previously, Facebook allowed navigating away to its Messenger through a similar icon on the top left corner of the app and Instagram allowed users to post pictures on Facebook via their app. But the new step makes the transition between the three apps more seamless—undoubtedly the ultimate goal of the parent company, Facebook.

Make no mistake, Facebook is not launching this feature for your convenience. This is not about user friendliness. This is about capturing the market better.

Facebook is a news-heavy platform. Ywt Instagram is more than just pictures, but also has a celebrity-fan engagement on a massive scale and brand engagement with customer base.

Perhaps that explains why Instagram is heating up the competition with Snapchat.

Just last week, the American Genius reported how Instagram launched face filters within its app “to turn an ordinary selfie into something fun and entertaining,” in yet another Snap feature rip off.

Back in April 2012, when Mark Zuckerberg acquired Instagram for $1 billion, many experts laughed away the move as whimsical and perhaps directionless. Less than five years on, Instagram has firmly positioned itself as the most precious weapon within Facebook’s arsenal.

For now it seems clear, that no matter Instagram or Facebook does better, Mark Zuckerberg gets the last laugh.