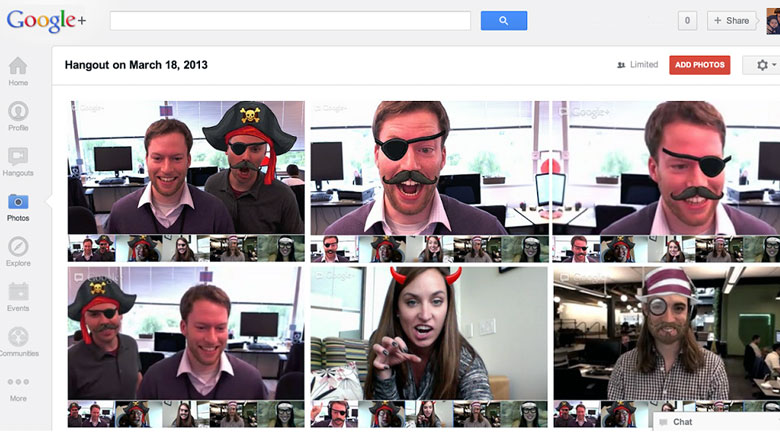 Google+ Hangout softwere developer, Jeremy Ng explains, “Google+ Hangouts bring people together, and when they do, all sorts of awesome can unfold. Maybe it’s reading a bedtime story to your grandkids across the country. Maybe it’s taking a cooking class from your kitchen. Or maybe it’s answering questions from your constituents,” adding that the challenge is capturing moments from those Hangouts.

That challenge has been answered with the new mechanism which allows users to snap pictures of the Hangout as it is in progress with a single click (read: no more having to take and save screenshots), and all photos are saved to an album shared with and visible only to other participants of the Hangout.

Google says the photos can be viewed while inside the Hangout, when browsing your own photo albums, or by visiting the original Hangout post. The strong benefit is that all parties are aware of photos and video being taken, so the app adds a layer of transparency.

“The Hangouts Capture app will soon be available worldwide, so look for it the next time you join a Hangout. Together with Effects, YouTube and other apps, we hope you’ll find Hangouts an even better way to make memories together,” Ng said via Google+ update.

Brands of all sizes are using Google+ Hangouts not only to better connect with their consumers, but to showcase their business, staff, products, and news.

With the new Capture mechanism, Google+ Hangouts just became more useful, as businesses can better document and showcase the events that went on during the Hangout that participants can revisit, adding a new layer of interactivity and a reason for people to go back to the brand online.

In this article:google, google plus, google+ hangouts, Social Media