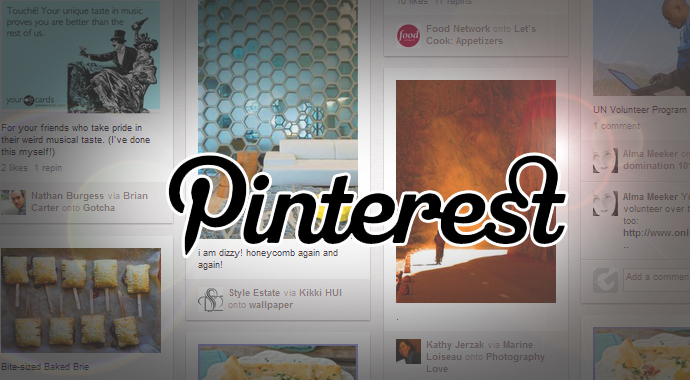 Because AGBeat has led the conversation on visual bookmarking tool, Pinterest for several months now and shared tips, best practices, news and more, we would now like to share with you a few examples of how brands are using Pinterest in an effort to inspire your own Pinterest strategy. The site is not for all companies and is not suited for all brands, but for creative-minded brands and companies that rely on aesthetics or offer tangible products, the site is a wonderful traffic generator. 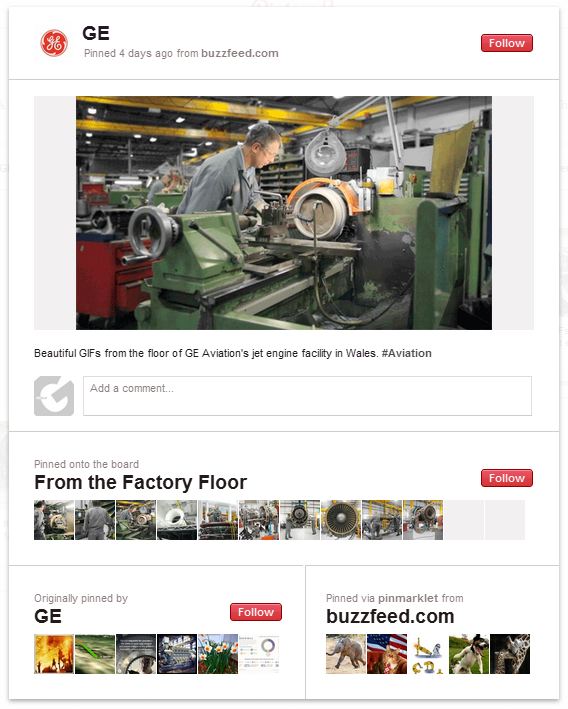 General Electric has several creative boards on Pinterest ranging from hashtag-driven boards like #GEinspiredME and #WhatWorks to inside looks at the company like the GE Cafe.

What caught our attention, however is the “From the Factory Floor” board which shows “A series of cinemagraph-style GIFs depicting scenes from the factory floor at GE Aviation in Wales. These animations were created by Adam Senatori (the winner of our 2011 GE Instagrapher contest).” The genius in sharing these animated gifs (that are incredible, by the way) is that Pinterest does not support animated images, so viewers have to actually click through to visit the site to see the animated gifs, and for loyalists and enthusiasts, it is well worth it.

Discovering ways to drive traffic from Pinterest is not complicated, but brands have to give people a reason to do more than peruse Pinterest but push them elsewhere, as GE has done with their brilliant animated gif series that gives you a glimpse into one of their factories. 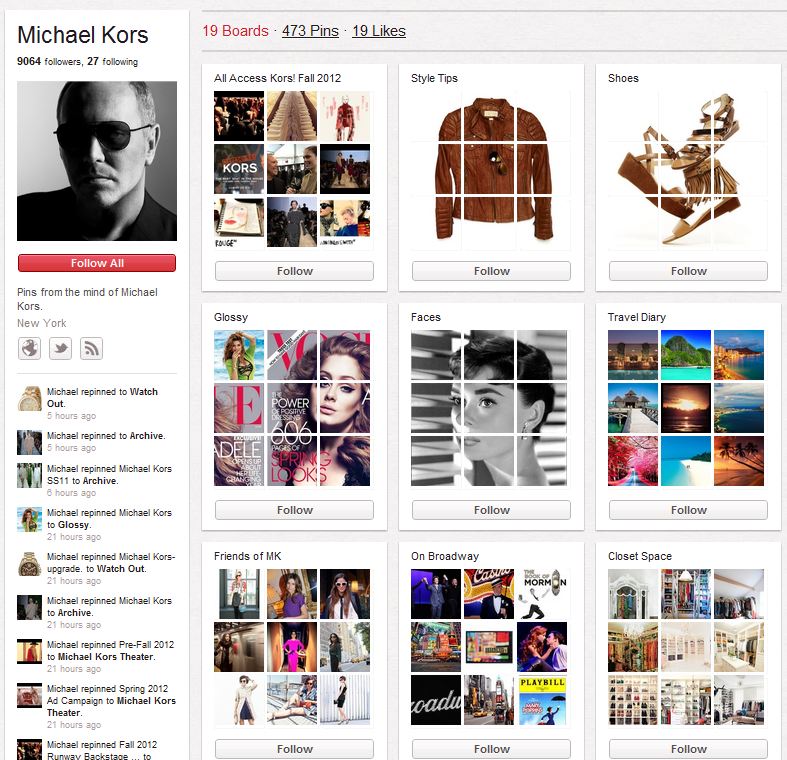 Let’s face it, Pinterest was born for retailers, particularly fashion and design retailers, so there is a lot of competition in this arena. The Michael Kors brand is using the site to share style tips and trends, but they do so by using paneling to split an image up into nine sectors, then post them sequentially, which forms a single image when you look at a board, as seen above with the leather jacket and Audrey Hepburn images.

The genius of the Kors campaign is that in a sea of hundreds (thousands?) of retailers who have flocked to Pinterest, they are finding ways to stand out visually and capture attention quickly, giving consumers a reason to dig deeper into their boards down to the actual pin level where they will find tips, tricks, trends and of course designs for sale. 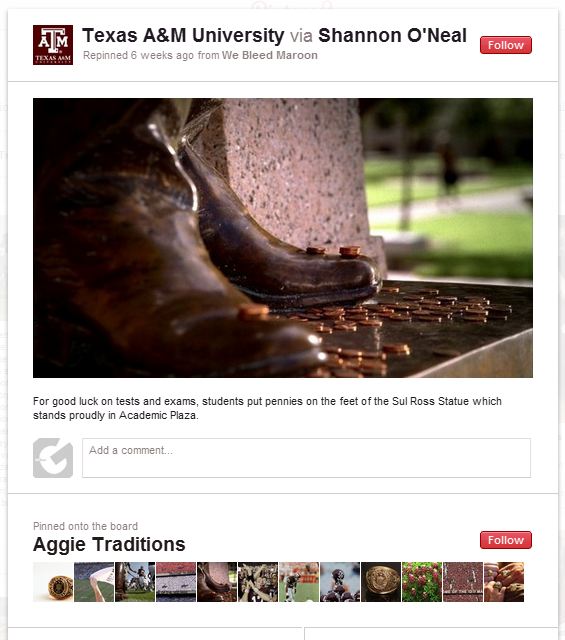 While some educational institutions have discovered Pinterest, the interest is still low compared to retail and fashion, so the bar is fairly low, but that didn’t stop A&M from being extremely creative. Rather than post pictures of generic classrooms with generic students, they have posted superior images of the campus, of Aggie sayings, Aggie babies, Aggie decor, and everything an Aggie would love – and they are a very loyal group. The images are superior not only because of content but quality.

We were most fascinated by the “Aggie Traditions” board that explains what some of the strange goings-on at the University are and why they exist. It is just fascinating enough for people, even non-fans to re-pin with comments like “did you know?” or “I had no idea!” As a brand, if you can get people to organically talk about you through Pinterest, you can chalk that up as a branding win. 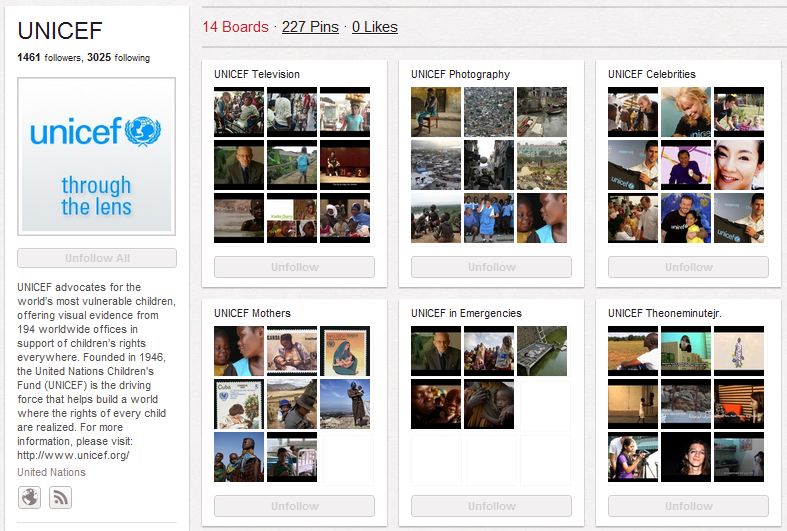 Non-profits are using Pinterest widely, but many are falling into the trap of sharing home decor and recipes, which is great, but the “me too” attitude will get brands nowhere in this arena. UNICEF does a unique job of staying on message with boards like “UNICEF Mothers,” “UNICEF Celebrities,” and “UNICEF in Emergencies,” and the messaging and branding remains on task.

Brands that focus on sharing relevant information to the brand and promoting the actionables consumers should take will advance any marketing efforts on Pinterest. 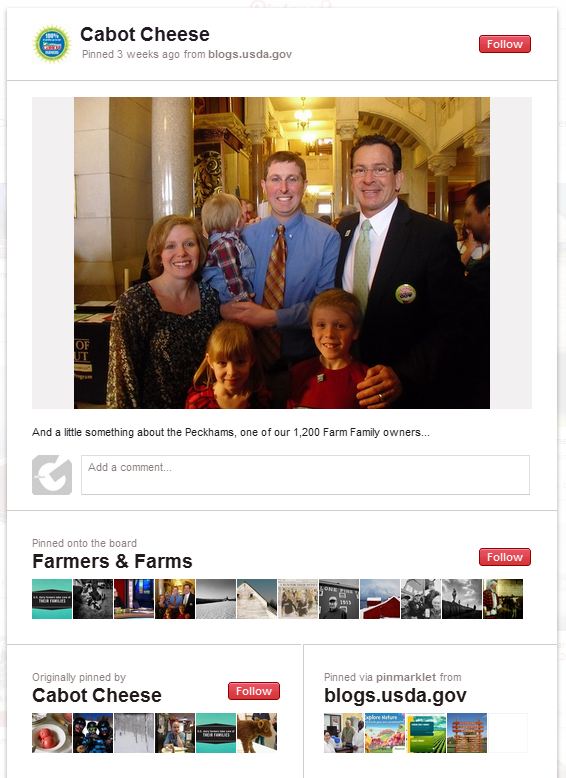 Above is an example of a pin that gives people a closer look at their brand and the hands that actually make the cheese which gives people a chance to connect with the brand on a human level and relate to those being featured.

Brands will do well to feature not only their teams and employees, but tell their story and give a human feel to the company. Alternatively, highlighting consumers of the brand is a great way to connect with a brand’s core demographic and give back to the community the attention they have given to the brand. 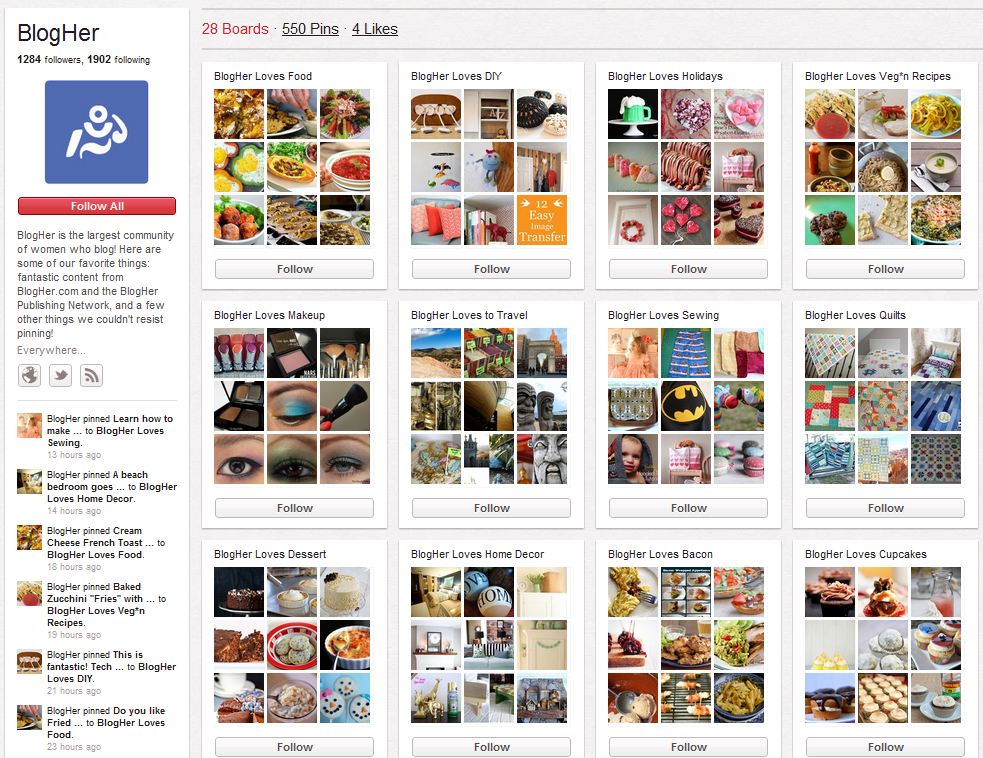 BlogHer is a tight knit and quite large community whether Pinterest exists or not, but it is the perfect platform for their community and they have jumped right on in and already pinned over 550 times across 28 boards. The brand’s genius is that they are not creating their own Pinterest culture, rather going right along with it, but with their own spin – instead of boards for “Food” or “DIY” or even “Books,” they have created dozens of boards with the consistent title “BlogHer Loves Food,” “BlogHer Loves DIY,” and “BlogHer Book Club.”

Brands that have the option to, should go with the flow on Pinterest and can find a legitimate, useful way to pin food, books and DIY projects like the thousands of others already doing so. BlogHer brands their boards and other brands are sure to follow their example, but brands should remember to keep the monkey see, monkey do to a minimum and put their own spin on their activities. 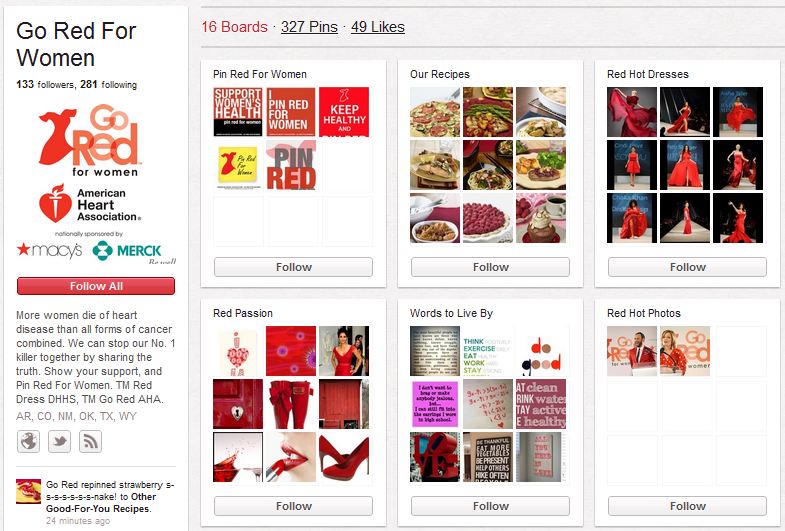 The “Go Red for Women” campaign is all over social networks, so it is no surprise to find a sea of red on a Pinterest account they have created. The brilliance of this campaign is consistency not only of message but of brand as everything they do centers around the color red – red dresses, red food, red photos and the like. Even when pinning stories about women who have heart health issues, they are portraits of ladies in red. They pin pictures of ways to “go red” and even those are, of course, red.

Branding visually is important and it doesn’t have to be done with a logo or a watermark, it can be done via visual theme which is a creative way to visually organize bookmarks (the point of Pinterest in the first place). If your brand has a visual element, use the heck out of it – creativity is the key to many pinners’ hearts!

We have had the unique opportunity to have used Pinterest for quite some time personally before launching a Pinterest account for our brand. We learned many lessons along the way and spent a long time observing before jumping in. It is tempting to use Pinterest for fun because for people like me with A.D.D. it is extremely entertaining and somewhat addictive, you keep telling yourself “just five more minutes.”

What we are proud of is that we have gotten a lot of positive feedback about sharing content from AGBeat in a non-intrusive way which we can do because we are art directed, meaning every story goes through an editorial process that includes graphics that are not recycled clip art images from the 90s like most do. All of our images are pinnable and more importantly, pin-worthy. So brands that find themselves seeking ways to share content should be sure that their lead images are pin-worthy.

The site is young and blossoming before our very eyes. It has a long way to go, and there is still a chance that it could become a Myspace if spammers have their way, but for now, the culture is that of sharing information and emphasizing content over popularity of the pinner, which gives brands a level playing field with everyone else to get involved, be interesting, be consistent, be visually appealing and to give back, and no brand should by shy about trying to push traffic back to their own sites or offering a call to action.