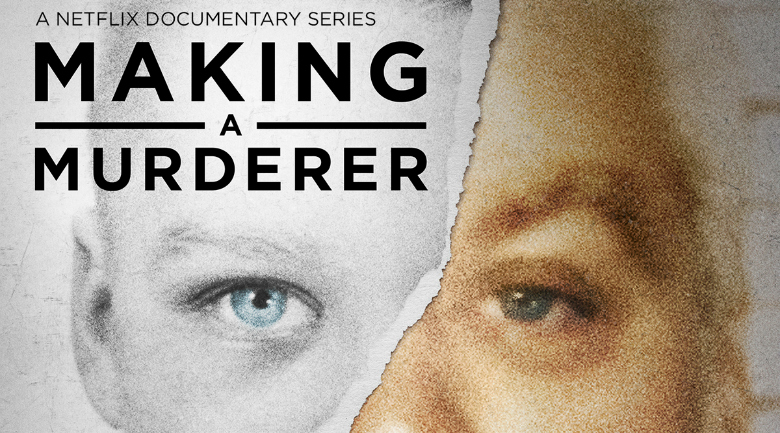 The first places that many consumers visit for feedback on the quality of service for a local business is typically Yelp, Google Reviews, or other review sites — but what about how justice has been served?

That’s how viewers of Netflix’s explosive true-crime documentary, “Making A Murderer” are voicing their opinion about several people and their businesses portrayed in the ten-part series. The documentary focuses on the controversial murder investigation and subsequent trials surrounding the homicide of Teresa Halbach.

While most online debates are typically held in forums such as Reddit or on Twitter, it has been reported that many viewers who are displeased with the outcome of the trial as represented in “Making a Murderer” are taking instead to Yelp to express their outrage in a more direct manner.

More specifically, viewers are posting negative reviews on the legal firm pages for one of the defense attorneys as well as Ken Kratz, the former prosecuting attorney who now uses the case to promote his private law firm.

Note from the Editor: The same has happened, but to a lesser extent at Len Kachinsky’s firm, Sisson Law, formerly Sisson & Kachinsky Law. According to Inquisitr, the firm has hidden the bio of Brendan Dassey’s court-appointed representation, and Kachinsky has been posting on his own Facebook page about anxiety over his cancer. 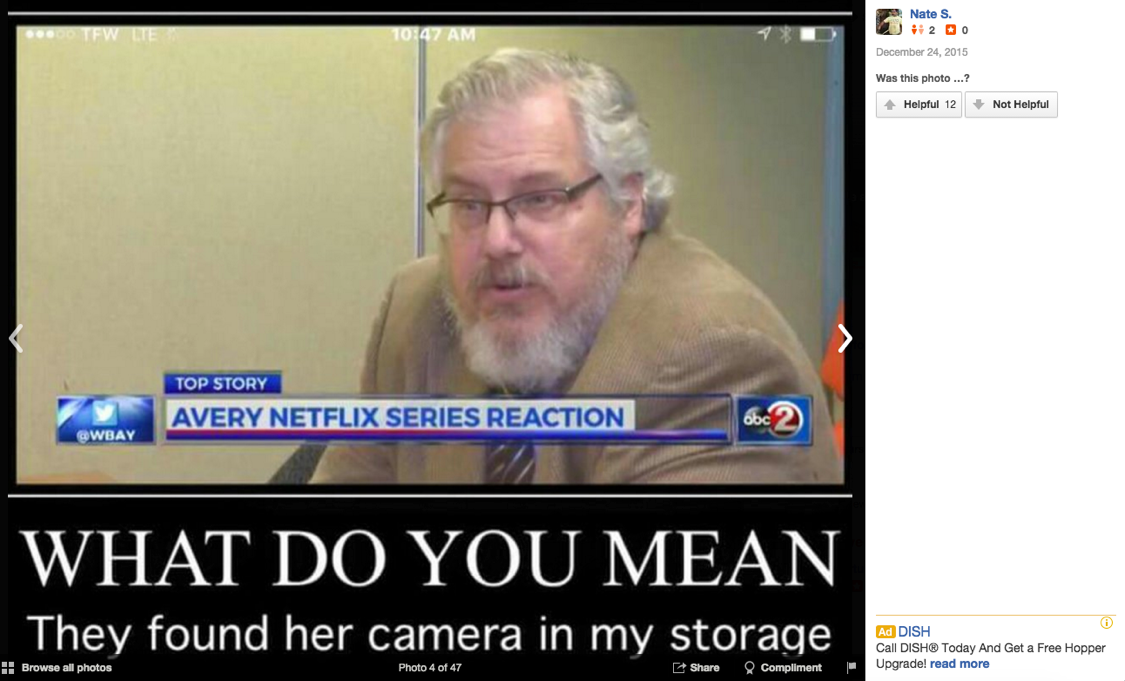 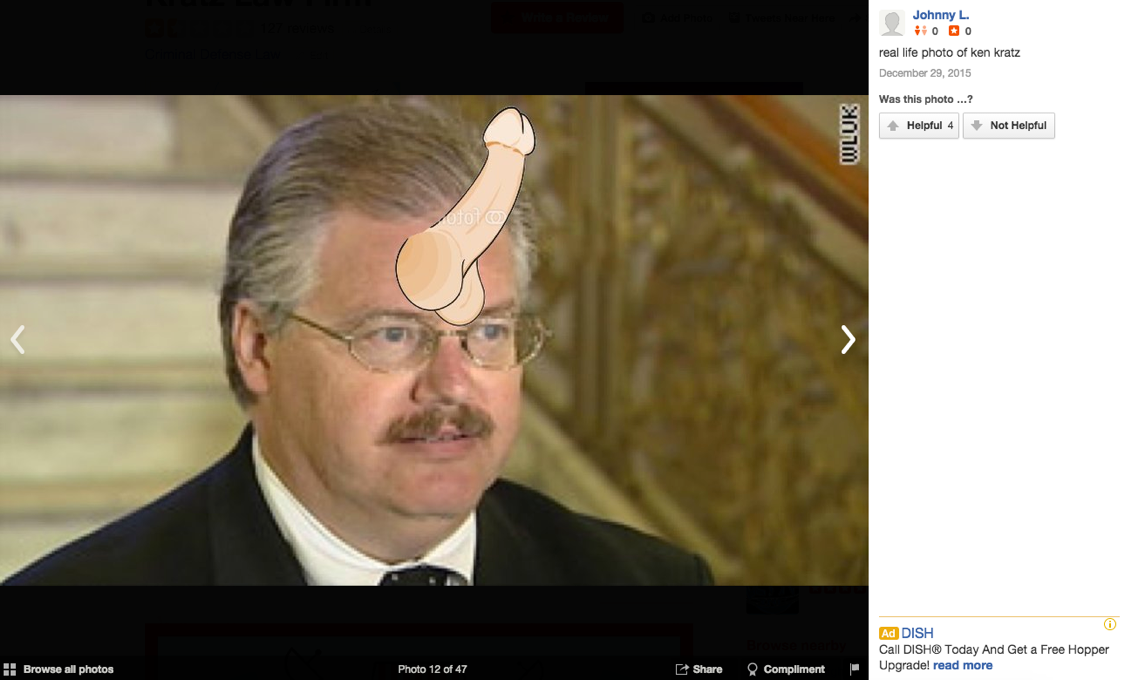 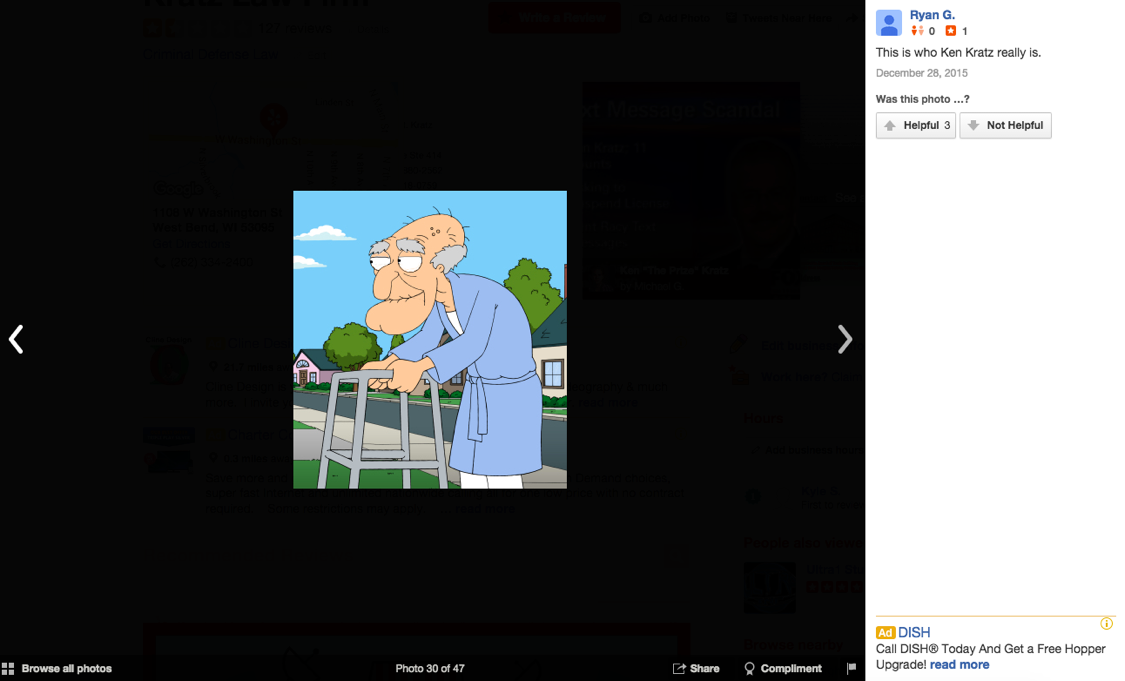 Because of the amount and nature of recent reviews, Yelp has placed an active cleanup alert on Kratz’s law firm page and directs posters to use the Yelp Talk forum to voice their opinion on the news.

From the alert — “While we don’t take a stand one way or the other when it comes to these news events, we do work to remove both positive and negative posts that appear to be motivated more by the news coverage itself than the reviewer’s personal consumer experience with the business.” 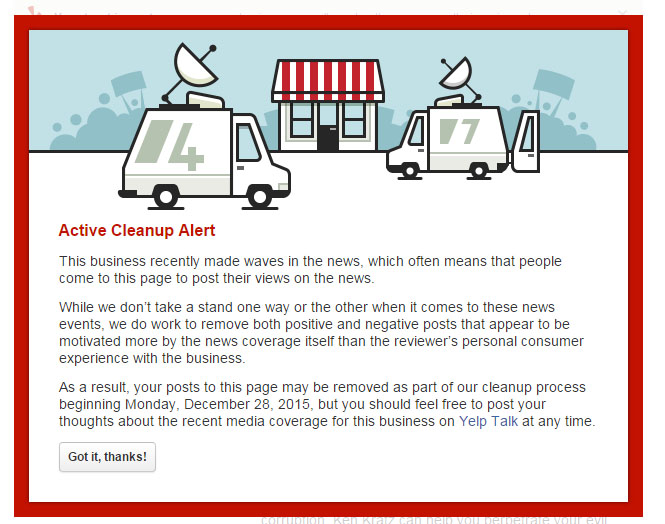 According to its Content Guidelines page, the intent of Yelp is for users to contribute reviews, and make sure that contributions are relevant and appropriate. As stated in the Relevance section, “…reviews aren’t the place for rants about a business’s employment practices, political ideologies, extraordinary circumstances, or other matters that don’t address the core of the consumer experience.”

While Yelp itself may not take a public stand on these news events, someone at Yelp has enough of an opinion of these negative reviews. While attempting to capture an image of the alert, we noticed that the web page source code references this alert as “vigilante” as shown in this screen capture. 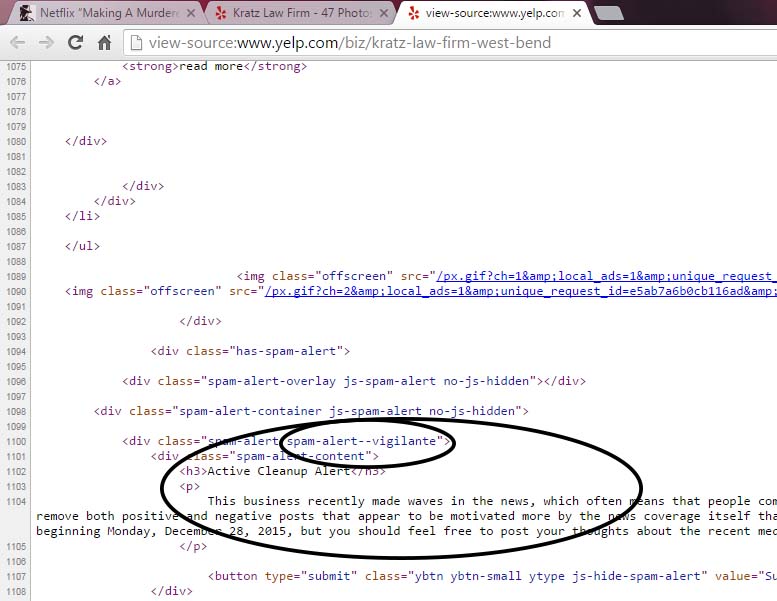 Note from the Editor: While it remains Yelp’s goal to keep a pure ratings and review environment, calling users “vigilante” appears to be a new tactic we cannot find elsewhere on the site. Further, as a news organization, we believe strongly in the First Amendment right to free speech, and labeling people who disagree with a controversial outcome of a series of cases “vigilante” is questionable at best.

We have documented all reviews as of publication (see links above), as another case led to a scrubbing of a Yelp account long after the fact. In 2014, an Oklahoma bar owner said “no faggots” in his bar, and Yelp users created a parody site to call his business the “Best Gay Club” in the city with hundreds of “reviews”. That Yelp page now has no more than four “real” looking reviews, marking an alternative path Yelp has taken.

The controversy and debate over “Making A Murderer” continues long after the cameras have stopped rolling. Filmmaker Moira Demos stated in this December 30th CBS News article that “our question going in was never about guilt or innocence or about trying to solve this crime. It was really an exploration into the system.”

Kratz told CBS News that the Netflix series “leaves out key DNA and other evidence.”

In an interesting twist, a Twitter account allegedly associated to hacker collective Anonymous and a related group, Ghost Security, stated that the groups would be releasing hacked data that would expose wrongdoing in the murder case. Media sites and discussion forums had picked up that story, but it has now been reported as false.

According to the Ghost Security Twitter account, “#GhostSec is not at all affiliated with #MakingAMurderer” and directs media inquiries to the original poster. Whether this claim is merely someone trolling under the hacktivist moniker, or actually has relevant information remains to be seen.

The complications of public perception

A key observation of these events represented by and surrounding the documentary “Making a Murderer” is of the many facets and influences of public perception (which is ironically a continuing theme throughout the documentary). The perception created and presented by the news media as well as the television and film industry has always existed and been a profound influence of public opinion, but now there is the perception that can be created and propagated on social media and review sites by armchair vigilantes and judges.

Viewers may erroneously apply Occam’s razor for their own verdict despite not having all the evidence presented to the court. On the other hand, drawing attention to a controversial matter through documentary filmmaking and social media can be paramount in addressing an injustice. Errol Morris’ 1988 documentary film, THE THIN BLUE LINE, is a prime example of a film and its surrounding publicity influencing the outcome of a conviction, with the exoneration of its main subject Randall Dale Adams. A year after the film’s release, Adams’ case was reviewed and he was released after thirteen years of a life sentence for a crime that he did not commit.

On a less somber note, a simple lesson to be learned from the public use of review sites for expressing opinion is that as a business owner you should have some control and oversight of your online presence. While having the time and resources required to manage your content can be taxing and time-consuming, it’s important to be aware and be responsive of feedback on any crowd-sourced review site. Devoting time to online engagement beyond damage control is a way to ensure client acquisition and retention.

Story update, January 3: We were able to locate another instance of Yelp using the term “vigilante” and have removed the reference to Yelp in the title of this story.