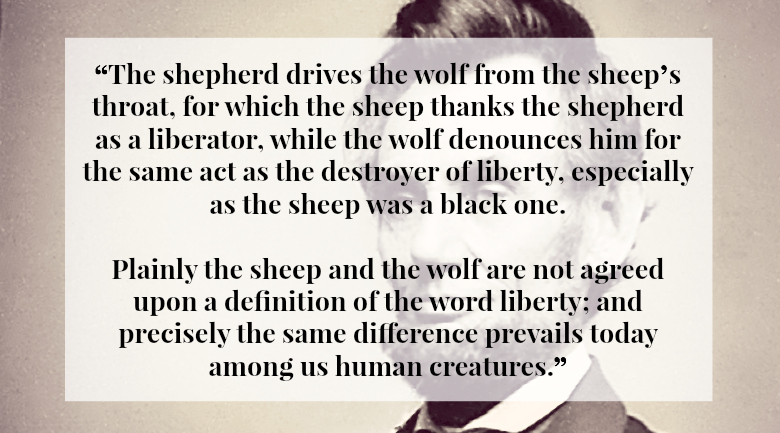 Thanking the shepherd as a liberator

In 1864, Abraham Lincoln gave an address at a Fair in Baltimore. In it he said this, “The shepherd drives the wolf from the sheep’s throat, for which the sheep thanks the shepherd as a liberator, while the wolf denounces him for the same act as the destroyer of liberty, especially as the sheep was a black one. Plainly the sheep and the wolf are not agreed upon a definition of the word liberty; and precisely the same difference prevails today among us human creatures…”

In the world of social media, privacy, not liberty is the issue. According to a recent study by the Pew Research, 69 percent of those queried were not confident that records of their online activities would remain secure.

Although 93 percent of the respondents believed in being in control over their online information and 90 percent indicated that controlling what information is collected is important, only 9 percent believed that they had “a lot” of control over what was collected. Only 6 percent were confident that government agencies could keep their records secure.

Credit card companies didn’t fare much better, with only 9 percent feeling very confident that data would remain secure and private and 29 percent answering as somewhat confident.

With the number of security breaches in 2015 (remember Anthem and Sally Beauty Supply), it’s no wonder that Americans aren’t confident in the ability of social media and other businesses to protect their information. According to a report in USA Today in September 2014, 43 percent of businesses had a security breach in the past year.

This leads to the question of the government stepping in as the shepherd to protect individuals’ privacy. Many consumers want limits as to how long a website can store your information.

Businesses might see the government as the wolf, just increasing their responsibilities about privacy and adding more work to their IT department. Somehow, consumers do need more confidence and control over private information, but if Washington DC steps in, it may upset a lot of people.