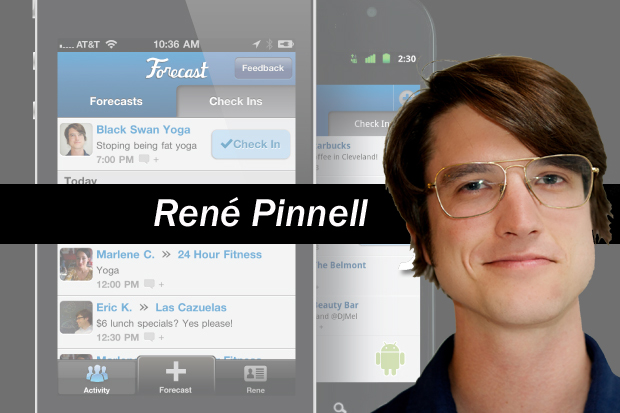 The irony of today’s definition of “social”

The Forecast app for iPhone and Android is an innovative way to connect people on a more impromptu basis by allowing users to post their plans for the next 24 hours, and based on Facebook connections, seeing which friends are nearby. Forecast Co-Founder, René Pinnell told AGBeat that their team struggled with the irony that the new definition of social was staring at a screen, so they used their passion for digital technology to fuel their company that many call “Foursquare for the future.”

What sets Forecast apart is that friends have to be nearby, and the app is being used for spontaneous gatherings. Pinnell said that the company’s vision is for Forecast “to be the first app people open when they get up in the morning,” to view what is going on, much like a calendar.

Fascinatingly, the base of loyal users are adding their own flavor by making recommendations and tips to each other, so the app has grown to be so much more than simply an impromptu gathering tool. “There is a pleasure in letting others know about neat stuff in town,” Pinnell noted.

Even the former PM of France uses it

Originally launched in 2010 as the “Hurricane Party” app, funded by Austin-based Capital Factory, the team expanded beyond nightlife to accommodate lifestyles more like their own. “We’re geeks,” Pinnell said, and the team found themselves inspired to go beyond Hurricane Party, which still exists and is supported in iTunes, so in July of 2011, the team launched Forecast as a test to 80 of their friends, mostly locals.

Within a week, the app exploded to 1,000 users and by the end of the second week skyrocketed to 10,000 users, with nearly 100,000 users as of today. Even the former Prime Minister of France is using the app to publicize his campaign events.

Creative personal and business uses for the app

Pinnell notes that the app is helpful for individuals, but that companies can find use for it as well, especially if they promote events – conferences they are hosting or attending, happy hours, recruiting functions, speaker panels, and the like. While the app works best when users have accumulated a larger network and expanded the possibilities of their connections offline, there is an exception… Because Forecast is designed to use “@” messages to mention other users, just like Twitter, Pinnell likes to @ message people from the app when they are going to meet for the first time, which can be posted to Twitter and act similarly to a calendar invite.

Working in film is similar to founding a startup

Spending a decade as a film director and producer, in 2006 through 2008, Pinnell Directed & Produced 30 episodes of the acclaimed comedy show, “Backpack Picnic,” among other credits. In 2009, he earned his Master’s degree in Design and says that working at a tech startup as the CEO and Designer is much like working in film in that you deal with a variety of backgrounds and have to communicate with different personality types and know a great deal about all of the disciplines involved in building something like Forecast.

Pinnell’s creative flair is evident throughout the app, especially in how through his leadership, the team has been phenomenally responsive to how the community has responded to and even created their own uses for the app. Given their rapid growth, it is easy to see how this Austin company could fulfill their vision of being that addictive app we all start our days off with, as opposed to calling sitting in front of a screen “social.”