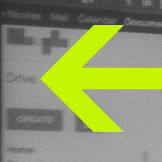 There have been rumors for years about Google Drive (aka GDrive) which is a cloud based hard drive for file syncing, and it is now being said that it may make its official launch as a rebranded version of Google Docs. At a Google event, social media professional Johannes Wigand took the snapshot above, noting that it flashed for a few seconds during a presentation, an accidental leak that has been not been confirmed by Google, although most tech analysts agree that Google Drive is soon to launch, resembling Google Docs.

MG Siegler at Tech Crunch says he has confirmed that Google employees are using GDrive internally and that their sources note it is a real project, although it was cut in 2008, it has been revamped for a pending release.

Before its demise in 2008, Google Docs already functioned similarly to what Google Drive is supposed to do, as it behaves as an online storage site for PDFs, videos, photos and videos, not just documents. Most people are still unaware of Google Docs’ possibilities, so most agree that rebranding it as GDrive will help consumer perception and wean budget-conscious people from paid hosting platforms. It is rumored that the only major addition to GDrive will be native syncing software that allows users to move documents and files from a computer or mobile device to another via simple drag and drop.

While Google continues its quest to be the dominant force in web and technology, this is one more step it is taking toward being a small business owner’s main toolbox. Google has to hurdle trust issues of consumers, however, as many continue to be leary of any third party that hosts their personal information or files, which is understandable. We have not seen the GDrive product yet, nor reviewed their privacy policy or terms of use, but it is likely that they will claim tight security of anything stored in their cloud.