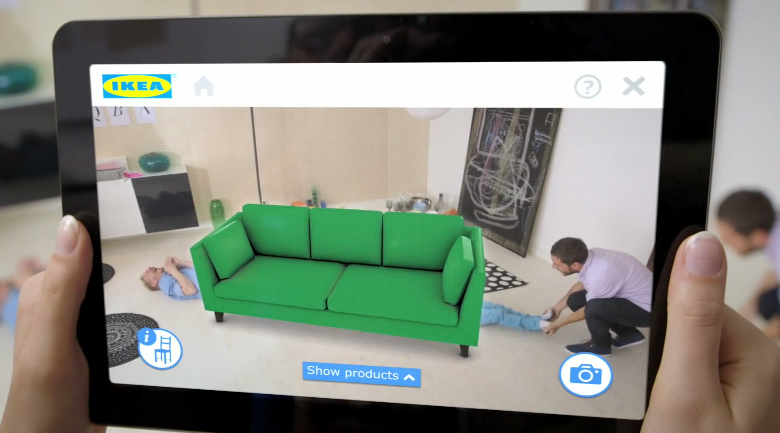 IKEA catalog gets even more fancy

In 2013, while many retailers were just deciding they needed to jump in on the QR codes trend, IKEA opted for more advanced technologies in the form of augmented reality for their catalog, allowing shoppers to open their catalog, and through the camera lens of their smartphone or tablet, dive deeper into the content on the pages, seeing cabinets open before their eyes and getting organization ideas and the like.

This year, IKEA has taken it one step further and unveiled their futuristic catalog that lets you view what their products would look like in your own room by simply placing the catalog on the floor or counter where you are imagining their product, turning the app on, and flipping through the options right in your home.

Augmented reality has been used for a variety of companies, and retailers have the most to gain – this move is one that could help launch the technology into the mainstream as technologists have been attempting to do for many years. The catalog is delivered around the world and products are also distributed internationally with stores across the globe, so with consumers’ understanding of this simple yet effective technology, it helps adoption rates for other retailers.

There are already third party apps like Furnish that offer furniture from various sources, including IKEA, and we anticipate more third party aggregators will emerge as the technology flourishes.

Has IKEA reached the pinnacle of what the technology can do? Certainly not – it is already being experimented with for many uses from medical to real estate, with retail as the vehicle that will help the world understand exactly how it works in simple terms.

Watch for big box retailers, especially fashion and home improvement stores, to follow suit – any company with a product is or should be looking at how to best utilize augmented reality in their own suite of tools.