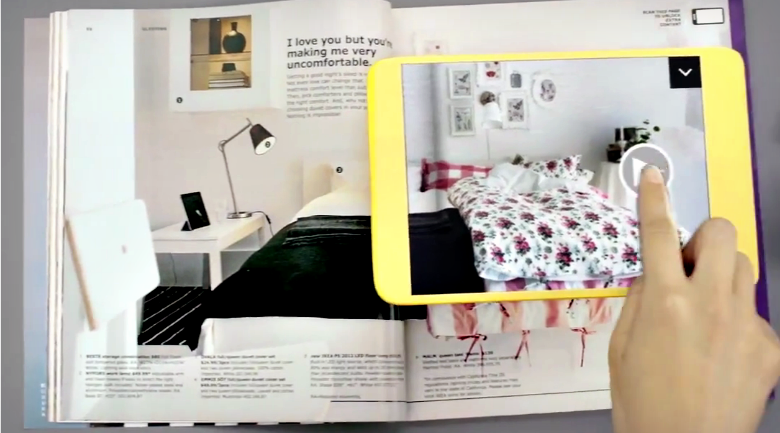 What is augmented reality?

Have you heard the term “augmented reality” (AR) in discussions about print and digital media? If you haven’t yet, you will, as this is the newest, coolest way to make catalogs, websites, and photos interactive and engaging. In its most basic definition, augmented reality is when you have a photo or video that represents real life and then you overlay a computer-generated image or design on top, seen through a smartphone or tablet’s camera, to create one intricate and intriguing piece. Augmented reality can be used to clarify or explain an image, add an improving element, or to encourage the viewer toward appropriate action, like purchasing something in the picture.

One great example for a company embracing the concept of augmented reality is Ikea. Earlier this year, we covered Ikea’s 2013 catalog, which has full augmented reality integration. And since then, many other companies have done the same in their own businesses, in one way or another. Ikea’s 2013 catalog, according to their online teaser, will allow users to view the physical catalog and scan their favorite pages with their phone.

When a page is scanned, and the proper Ikea app is downloaded, users will be able to see exclusive content, such as additional photos, decorating inspiration involving the piece of furniture, and even have videos that wouldn’t be accessible without the catalog and the app. All in all, Ikea has created a uniquely interactive catalog that beautifully combines digital and print.

How you can try out AR on a budget

Now don’t think that this means you have to compete with Ikea because you want to try out some form of augmented reality. And you don’t have to have Ikea’s budget to do it, either. That’s where The Layar Creator comes into the picture as one budget-conscious measure to implement AR into your marketing. You don’t have to hire a team of developers to do this for you; you can do all by yourself. Layar Creator is a web-based application that guides you through uploading images, choosing and including digital buttons onto that page, and, of course, helps you layer your page to give it a little a kick of flavor and individuality.

Your publications, flyers, catalogs, or any print pages no longer have to be static and boring. Make them dynamic and see the difference in your professional and consumer-based reception. Your company isn’t one-sided and flat, so why should your media be? Express yourself and your company’s goals through augmented reality and let your company stand out from the crowd.