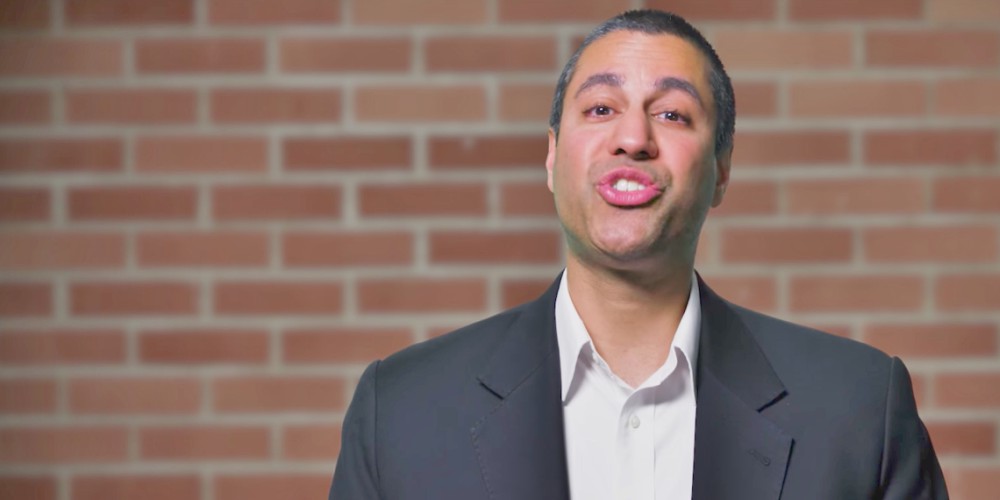 Leaked video shows FCC Chairman Ajit Pai joking about being a shill for Verizon, as we all suspected when he was nominated. Last week Pai was a speaker at the Federal Communications Bar Association, an event similar to the White House Correspondents Dinner.

Major telecom companies and the FCC gather at this annual event for dinner, mingling, and enduring awkward political policy jokes. At the event, Pai roasted himself about major headlines from the past year, like his decision to kill net neutrality against the wishes of the majority of the nation. Hilarious.

Pai also brought up the whole thing where he refused to cooperate with an investigation into the validity of comments filed in support of ending net neutrality.

Although cameras weren’t officially present at the event, someone surreptitiously filmed and sent the clip to Gizmodo. The kicker comes around twenty minutes into Pai’s speech when he jokes, “in collusion—I mean, in conclusion, sorry, my bad—many people are still shell-shocked that I’m up here tonight.”

He goes on, “they ask themselves, how on earth did this happen? Well, moments before tonight’s dinner, somebody leaked a fourteen-year-old video that helps answer that question, and in all candor, I can no longer hide from the truth.”

Pai then starts a video, which opens with 50 Cent’s “In Da Club” playing in the background. This is the only thing I’ll give him points for on this amateur drama class project.

The skit is set in 2003 at “Verizon’s DC Office”, when Pai was an attorney for the company. In the video, Kathy Grillo, current Verizon senior VP and deputy general counsel, tells Pai, “As you know, the FCC is captured by the industry, but we think it’s not captured enough, so we have a plan.”

“What plan?” Pai asks. Grillo tells him, “We want to brainwash and groom a Verizon puppet to install as FCC chairman. Think ‘Manchurian Candidate.’” To which Pai responds, “That sounds awesome!”

Gizmodo posted the video on Friday after the dinner, and the internet exploded with reactions to Pai’s gag. Reddit in particular went nuts, to the point that one thread in r/technology was locked—as in no one else can comment—for “too much violence.”

In a thread on the r/television subreddit, a moderator reminds users, “please refrain from encouraging or inciting violence or posting personal information […] don’t post anything inviting harassment, don’t harass, and don’t cheer on or upvote obvious vigilantism.”

While some of the threads were full of awful remarks, other posters commented in the spirit of reasonable conversation. The general sentiment of those engaged in non-harassing discussions is that Pai is a symptom, not the cause of FCC’s problems.

However, many argued that the video showed Pai’s willingness to bend (then joke about) FCC regulations indicates he’s not a puppet so much as a willing participant in corruption. Pai’s appointment to FCC Chairman was suspicious from the beginning considering his ties to Verizon.

Although Pai is obviously joking in the leaked video, the general public isn’t find it nearly as funny as those at the dinner.

Check out the clip for some cringe-worthy digs at net neutrality and have fun questioning the integrity of the FCC.

In this article:Ajit Pai, fcc, Tech, The News