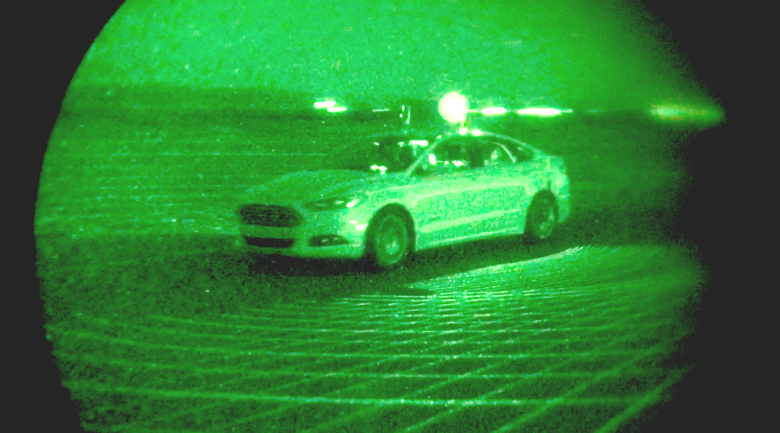 Ford out to prove the superiority of their system

In order for the public to accept something as unnerving as cars that drive themselves, auto manufacturers are going to have to prove and prove again their claims that “autonomous vehicles” will soon be able to drive not only as well as a human beings, but better.

Read also: Turns out drivers aren’t scared of autonomous cars, after all

Ford seems on the right track, having just shown that their autonomous car can drive itself in pitch black environments. The company tested the new technology in March at the Arizona Proving Ground, a facility that several auto manufacturers use to try out their latest creations.

It comes with it’s own night vision goggles, y’all

The car essentially comes with its own night vision goggles that use Lidar technology. Lidar (pronounced LIE-dar) is like radar, but it combines lasers with distance sensors and 3D mapping technology to help the vehicle orient itself in space, stay on the road, and avoid obstacles.

Previously, most autonomous cars have relied mostly on cameras. But, according to Ford’s technology leaders for autonomous vehicles, Jim McBride, “thanks to Lidar, the test cars aren’t reliant on the sun shining, nor cameras detecting painted white lines on the asphalt.”

Wayne Williams, the research scientist who rode in the car on its pioneer after-dark journey, reports that it was an “odd feeling” when he realized the car was driving perfectly, but looked out the window only to see total darkness.

Of course, there are not many reasons a car would need to drive in pitch blackness. Theoretically, a passenger in a self-driving vehicle doesn’t need to utilize the headlights to see where she is going. After all, headlights are as much about being seen as they are about seeing.

The test is less about practical applications, and is more about using any and all available technologies to give the autonomous vehicle as much data as possible for safe and efficient driving. Says McBride, “To do something as ambitious as making a car drive itself, you need lots of testing in lots of places so that you can cover all the scenarios you might ever expect to see.”

Many people are still skeptical about the safety of self-driving cars. However, while human drivers can only use their five senses to gather information and make decisions, autonomous vehicles can instantly compile information from Lidar, radar, GPS, traffic reports, and other sources.

It may time for humans to admit that some machines can surpass us. You wouldn’t dare drive your car down the street after dark, without the headlights, would you?

In this article:autonomous cars, Ford, Tech